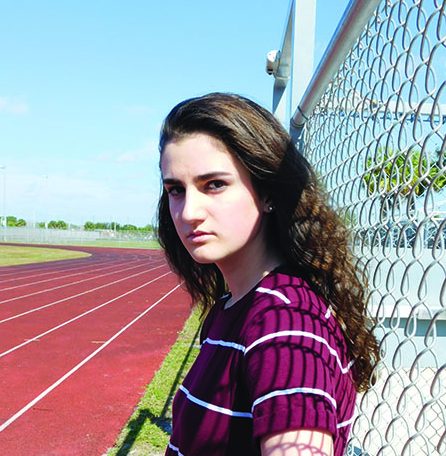 Meet Gabby. Although she still runs today for exercise, she used to use track and running as a way to lose weight, alongside cutting meals.

Senior Gabby Nixdorf endured a chronic eating disorder along with symptoms of depression. She shared her struggle as she battled both the evil of the disorder and the backlash from people around her.

Sulking in the backseat, she mused over the long school day ahead. Just a few weeks ago was the start of her freshman year, and things were not going well.
It did not take until the car came to a halt for her to realize that she was being set up. Almost immediately as the car stopped she sprinted across the parking lot. They did not need to say anything, she knew why she was here, and escaping from it was instinctively what she did.
Well, at least she tried to.
When she was young, Senior Gabby Nixdorf never had trouble with her weight, always being perceivably thin, which is why her parents did not detect an issue at first. To them, they saw a confident daughter with a contagious sense of humor, and as long as she kept that demeanor, Nixdorf was able to sarcastically put aside their suspicions. However, she could not keep the act up for long. So, before her weight changed that summer of her eighth grade year, her personality shifted to a more dark, impulsive mood: the first thing her parents took note of that something was wrong.
“It really blindsided my husband and I because we knew there was something wrong but we really didn’t know what it was, and, although I think that I’m a well educated person, I really knew very little about this particular disorder. What I mostly didn’t understand was how prevalent it really is among adolescent girls because once we were in the throes of dealing with this with Gabby, more and more people in my life started revealing their own struggles,“ Mother and Theatre Director Mrs. Stephanie Nixdorf said.
After Nixdorf received outpatient treatment in New York over that summer, the staff recommended her to go to a more advanced care, not only due to her lack of progression, but because they felt that Nixdorf would not be “able to do the work” necessary to get better. Soon enough, on the early morning of September 16, 2013, Nixdorf found herself tricked into a one way trip to a Boca treatment center, with her belongings hidden under a surfboard in the backseat.
“We told her we were making a stop on the way to school, I lied. I felt bad. I said I had to stop at the passport office and that’s why we kinda went out of our way. She caught on pretty quickly, and when we arrived at the center she did everything in her power to not have to go in, but, once we got her there, we definitely knew it was the right decision. She had a lot of anger. I had a lot of guilt about it. But sometimes the hardest things you do are for the best things for the people that you love,” Mrs. Nixdorf said.
Despite reading the countless news stories and overhearing the struggle of others, mental illnesses are hard to be fully understood by those who do not possess them. Although the notion of undergoing destructive behavior at the hands of something bigger than your own will is not something that can be easily understood by others not going through the mental illness themselves, but there is no reason why anyone cannot empathize and lend an ear.
“You get to a point where you recognize no hunger; you feel absolutely nothing. That probably should be the scariest part of all this. So being treated without my consent was probably frustrating but it’s absolutely necessary. I was definitely not in a frame of mind where I could make decisions for myself,” G. Nixdorf said.
Commonly tied to anorexia is the image of a girl desperately skipping meals to strive to achieve a goal weight. Although this may be a common case among many anorexics, it is definitely not the only one. Not only can anorexia be found in both sexes, but the disorder does not always form out of a desire to lose weight. In the case of Gabby Nixdorf, she never recalls having issues with her weight. Her eating disorder, chronic anorexia, developed outside of any weight problem. In fact, she still struggles to pinpoint a definitive reason why she developed the disorder.
“I have a very Type A perfectionism driven personality, so when I start something I’m hooked. Some people go through that stage of baby fat, and I honestly, looking back at pictures I didn’t go through that. But, in eighth grade, when I started seeing some changes in my body I immediately reacted to that, and I think that’s kind of where it started. Just some feelings of dissatisfaction, ” G. Nixdorf said.

Towards the end of her eighth grade year, May 2013, was when her persona started to turn for the worse. Not only was G. Nixdorf severely cutting back on her meals, she began purging.
“My parents found out because I was making myself vomit. Besides that, you could tell that I had lost a lot of weight, and when you go through that amount of weight loss in such a quick period of time, your entire personality changes. I wasn’t eating with them. When I did it was very, very small, or I would get rid of it. It’s easy to pick up on those behaviors, and my parents are extremely keen. They didn’t just ignore and pretend it wasn’t an issue, they immediately acted. So I didn’t get very far along without them noticing something was wrong.”
Cutting her meals was not the only tactic she used to keep weight off. As a member of track during her freshmen year, she took her troubles out through excessive running.
“I started running as a way to control my weight, and I masked it that I was trying to be healthy and exercise. I actually made it to states in freshman year. It helped me a lot to get out of the bad place, but also falling down a little bit more,” G. Nixdorf said
Aside from her parents, Nixdorf was fortunate to have some friends from school and from the center to confide in. Unfortunately, as if struggling from her illness was not enough of a burden to bear, she began to overhear a select number of students criticize her for, of all things, being an “attention seeker.” Full of frustration, she took to social media to educate people about it.
“It’s one of those double edged swords when I came back to school. While I was in treatment during freshman year, I just started treatment for the first two weeks and then I was in treatment for the entire nine weeks. And I came back and a lot of people were discussing the fact that I starved myself for attention. Going into a new school is hard enough, starting high school with all that going on, missing so much is difficult. So I put up that [Instagram] post to explain that mental illness is much more complicated than that,” Nixdorf said.
Of course, recovery does not stop after her long stay at the treatment center. For the years that followed, she attended numerous therapy sessions, none of which she claims were significant towards her recovery. Unfortunately, as relapses are common in patients diagnosed with chronic anorexia, she still falls into the cycle when faced with all types of triggers, like how she did this past fall.
“It’s always in the back of your mind. This fall I had a couple slips actually. I overheard a conversation [of people saying] “Oh she’s not even that attractive, she gained so much weight over the summer.” If there’s one thing you cannot say to me it’s that. This person wasn’t even that close to me, but knows my history and background. That they were able to say that is horrible. So probably between the start of the school year and now I lost like 23 pounds, but I’m working on finding balance between diet and exercise. So it’s always something you have to be mindful of. I wouldn’t say I still have an eating disorder in today’s time, but it’s easy to let yourself to fall back in old comfortable behaviors as a result of trying to deal with stressors,” Gabby Nixdorf said.
Although her parents sent her to treatment against her wishes, looking back on it, both agreed how it was necessary. The last thing they wanted was to witness their child being consumed by this overpowering illness; which was why her parents chose to follow through with the difficult decision. Luckily, their relationship now does not at all represent the tension felt during the summer of 2013.
“I don’t think there were any long term negative effects. If anything it made us closer because she realized we were willing to make tremendous sacrifices to pursue her treatment and I think she also understands now that her father and I, we don’t want anything bad to happen to her and we’re always going to be there for her even after she goes away for school. But we knew that her best shot at recovering from this full time would be to be very aggressive in the beginning,” Mrs. Nixdorf said.