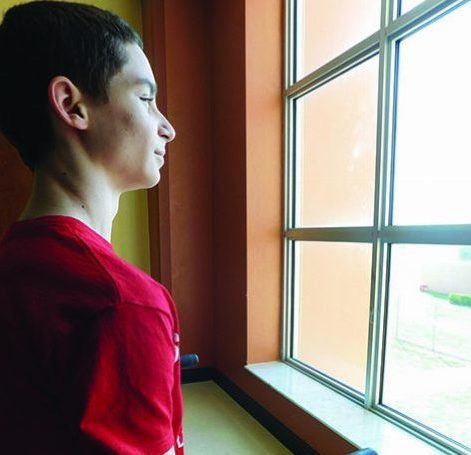 He is more than his physical disability.

Gripping on the handles, he pushed himself forward for several steps, momentarily pausing before making a few more. Fortunately, the bell for the next block is not until five after, so being caught in the stream of students was the least of his concern for the moment.
Settled into class, his walker rested in the front of the classroom. Although his classmates were too caught up in conversation to notice its presence, he cannot always say the same.
It can be easy to get caught up in the never ending stream of college applications, assessments, and orals, but in comparison to the end goal in mind, each of these deadlines shrivel up to the ‘small stuff.’ It is the ‘big stuff’ that defines us. However, the small stuff we all face does not only encompass schoolwork. For Senior Nico D’Angelo, it means his cerebral palsy.
“I very rarely gave it much active thought, but from a very early age I shifted my attention away from physically intensive activities and began to favor more intellectual and academic pursuits,” D’Angelo said.
Pity is sometimes the first thing that comes to mind when someone approaches a disabled person, and this should never be the case. In fact, speaking down to someone, whether they are physically or mentally disabled, can only result in them taking deep offense and feeling insecure. What can seem a ‘harmless question’ drafted out of innocent curiosity to one could drain the color from the face of another, pushing them deep into the conceptual box they most likely fought so hard to stay out of.
“Sometimes people speak to someone with a disability in an overly/overtly condescending way. While one should be mindful of potential mental differences, it is unnecessary to talk down to someone simply because their appearance indicated that they have a disability,” D’Angelo said.
D’Angelo has been diagnosed with the neurological disease since birth. However, he didn’t let his lack of ability to walk hinder his potential. In fact, he chose to channel it elsewhere. It was not long after his epiphany that he began to widen the scope of his knowledge, reading classics such as Moby Dick and Frankenstein. His shift towards his new passion was not in spite of his lack of mobility. In fact, he was not the only one who saw this love brew inside him.
“It started when I was very young. At least according to my parents, it started as early as preschool [about 4 or 5 years old] and became even more apparent when I reached elementary school. I spent most of my time reading as many books as I could, and asked [seemingly] ‘endless’ streams of questions about everything I learned and observed,” he said.
However, despite his persevering ambitious nature, he still falls into waves of insecurities regarding his disability. Most students know him as the senior with the walker, and although he does not let himself get overly self-conscious about his walker, it still creeps up on him from time to time.
“[I am insecure about it] especially when trying to avoid obstructing the paths of others when I am not using it. It is still an awkward area of concern, but I do not give it nearly as much thought as I did previously,” he said.
Fortunately, he is able to not let his insecurities get the best of him. Lucky for him, he has not experienced a bombardment of questions surrounding his disability from his peers around him, but that does not stop the stares of strangers and curious children. He still advocates against others acting on their curiosity regarding disabilities. At the end of the day, that curiosity can result in avoidable discomfort.
“One should never presume to know the extent of a person’s capabilities, even with the best of intentions, based upon their appearance or initial impression. This is especially true of mental disabilities, the extents of which are rarely apparent,” D’Angelo said.
Today, D’Angelo focuses on his love for chemistry and physics. Planning to study in either Stanford or Yale, describing him as ambitious is nothing more than a mediocre understatement.
“I plan on majoring in biochemistry, and later pharmacology. I haven’t really studied biology deeply, but what I have learned has made it seem as much of it is essentially just a set of specific applications of organic chemistry. I enjoy learning physics on a conceptual and theoretical level, but the mathematics involved in specific applications can seem tedious and redundant,” he said.