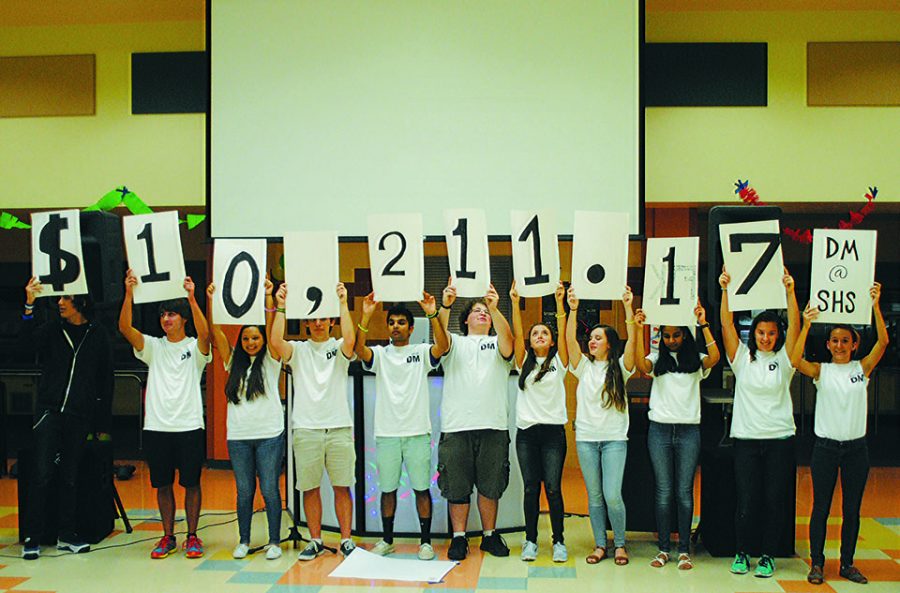 for the kids. At the end of the night, members reveal the total raised.

DANCING FOR THE KIDS

National Honor Society’s Dance Marathon brought students together for a night of dancing and raised over $10,000.

On March 3, National Honor Society (NHS) held its second annual Dance Marathon to support Children’s Miracle Network Hospitals. From 4 to 10 p.m. attendees were required to stay standing in honor of the kids who cannot.
“I think Dance Marathon was very successful. By the end of the night, we had over $10,000 raised, so we more than doubled our money [from last year],” NHS president Dylan Hansel said.
Starting in the ‘60s with music from the Beatles and the Monkees, each hour’s theme was a different decade of music, leading up to the hits of the 2010s. There were a variety of games and activities to keep students entertained the entire time.
“You basically get to choose your own event at Dance Marathon with the sports and games. It was overall a pretty fun event,” Hansel said.
Everyone present had the opportunity to FaceTime Nate, a boy with Mitochondrial Disease who has received treatment at UF Health Shands Children’s Hospital since he was born, and his family. In addition, students heard the stories of other kids who have received support from Children’s Miracle Network.
“These kids are really inspiring. It’s interesting to talk to them and hear how the support of this program has helped. [Dance Marathon] really does make an impact on their lives. It gives them the services and everything they need to keep going each day. To be able to talk to the kids was really interesting because it really put into perspective what exactly these funds are going to,” Hansel said.
Children’s Miracle Network Hospitals provide kids with life-saving treatments and medications. Last year, Dance Marathons across the country raised over $26 million for kids in need.
“We’re the lucky ones,” Suncoast alumnus Paras Mehta said in a speech. “Close your eyes and think of your childhood. Imagine the toys, the playdates, and the surprise trips to Disney you had growing growing up. Now swap those toys for needles, the playdates for surgeries, and the surprise trips to Disney with trips to the hospital. We’re not just fighting for [these kids’] lives, we’re fighting for their childhoods.”
Because this was only the second annual Dance Marathon, NHS is looking forward to more improvement in the upcoming years with more experience.
Hansel said, “It’d be awesome if every year we can double our money raised. This is just the second year that we’re doing it, and we’re really trying to build so we can raise a lot more money in the future.”