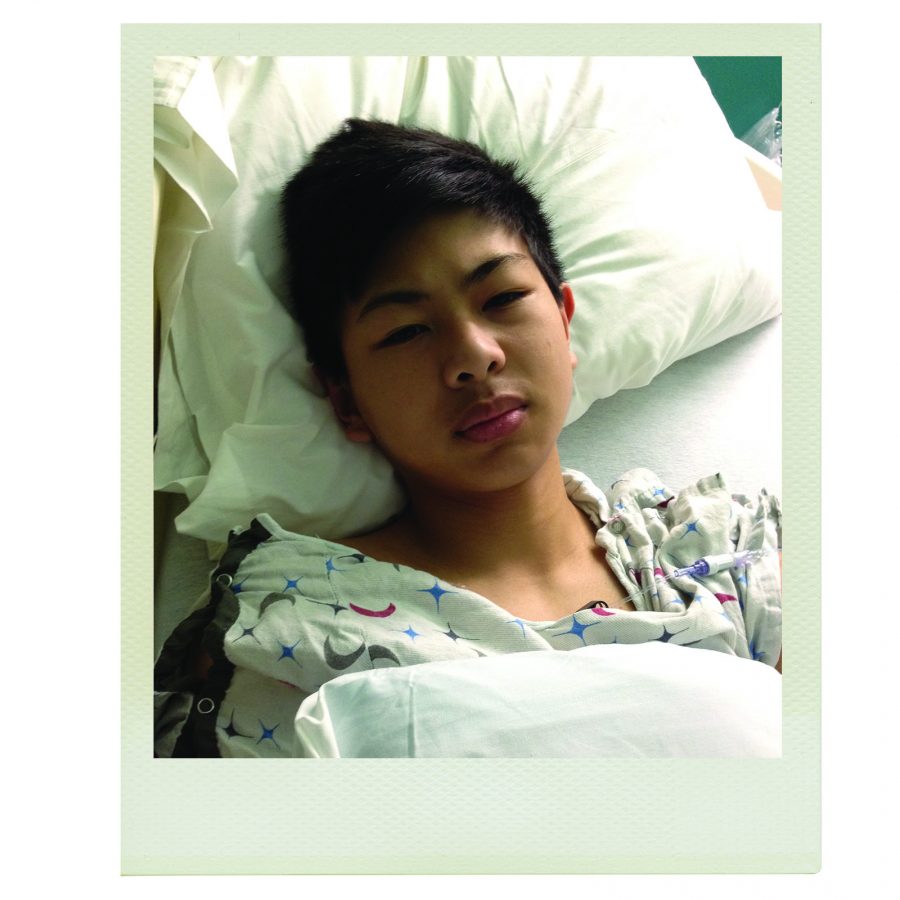 If you thought your junior year was bad, try spending it inside a hospital undergoing multiple rounds of chemotherapy.

For Patrick Vo, it all started with a single game of tennis.
After a strong serve in a tennis match last June, Vo fell to the ground, realizing that he could not feel his toes. Laying on the ground and writhing in pain, he quickly discovered that a disk in his spine popped out. After alerting his parents, they sped to the hospital and ordered an MRI.
But at the hospital, he learned that the cause of his spinal issue was more serious than he had expected: his MRI revealed that there were lymph nodes all around his back and stomach. Doctors are infamous for using medical jargon that is difficult to decipher, and this case was no different. After sitting and listening to the doctors speak, Patrick realized that he had Stage 4 Lymphoma, known as the cancer of the blood.
Understandably, Vo and his family were extremely upset. But unlike his parents, he was not completely shocked.
“Personally, I kind of felt that something bad had happened. because I was in a lot of pain during sophomore year. I didn’t go to the doctor because we didn’t think that it was out of the ordinary but I had a lot of pain in my back, stomach, and chest as well as night sweats. I would wake up sitting in puddles of sweat. I didn’t expect anything to be really wrong at the time, but I was on painkillers a lot in my sophomore year. When I took the MRI, I didn’t expect cancer, but I did suspect that something was wrong,” Vo said.
These pains, which he thought were occurring because he was playing tennis too hard, had actually been occurring due to his developing lymph nodes. Lymphoma symptoms include unusual fatigue, pain, swelling in the legs and ankles, breathlessness- and night sweats. Because the first reaction to body pains is generally not assuming you have cancer, it is not surprising that Vo ‘s method of pain reduction included playing less tennis and taking painkillers like Advil. Once he discovered the real cause of the pain, his entire life was altered.
“My doctors tried to keep me positive. They told me to stay happy even though I had cancer, and although it was serious, it was still possible to go into remission,” Vo said.
Within a month, Vo began to undergo chemotherapy, which happened every two weeks. At times, it was a traumatic experience that made it difficult for him to stay positive.
“I received the chemotherapy through a port on my chest that I had to put in myself. Chemo was bad; it gave me stomachaches and made me throw up. Whenever I took a shower, my hair would fall out and I would find new scars,” Vo said.
Due to the newly fragile state of his immune system, Vo came to the realization that getting sick was no longer an option after a terrifying trip to the ICU.
“After my first round of chemotherapy in July, I got a cold from my little cousin who accidentally coughed in my face. At the moment I didn’t think I was that fragile so I didn’t think I would get sick, but the next day I felt exhausted and I got a 102 degree fever. My mom took me to the ER, where I passed out and got rushed to the ICU. They put on another port without the numbing cream, but they had to take it off because my vein was too small, and I passed out again from the pain. Eventually my temperature went back down,” Vo said.

Vo learned that the fragility of his health was not the only part of his life that would be impacted. Although August came and went, he spent the majority of his day in a bed, rather than in a classroom. Once his junior year began, he took five classes at home through FLVS and Hospital Homebound, a program for students living with disabilities who are unable to go to school that allows them to learn one on one through the phone.
“In Hospital Homebound, there aren’t a lot of AP classes available. Although I wanted to keep up with my classes, I also knew that taking AP classes would be really exhausting for me. I tried to keep up with all my work and still be a “typical” Suncoast student, but every time I did homework, I would get really bad migraines. Eventually my dad told me that I should lighten my courseload,” Vo said.
When he was not attempting schoolwork, Vo recieved visitors from all over the world.
“One of my cousins from Australia came to visit us just because of me. I didn’t know he was coming so when I saw this guy pop his head in with a big surfboard, I got really excited,” Vo said.
Although his parents tried to reduce the amount of visitors for his safety, Vo made sure he welcomed visitors on his terms.
“I was pretty picky, and I didn’t want to wear the mask because it was hard to breathe, so whenever people came in my room, I would make everyone else (including the nurses) wear the masks so I didn’t have to,” Vo said.
Life in a hospital can get dull quickly and Vo found that he spent the majority of his time playing video games, until he made a new friend.
“I spent all day, every day on my computer. But one day a seven year old girl came into my room uninvited and asked me to play. We played boardgames and I taught her how to play my video games,” Vo said.
That little girl passed away from leukemia a few months later, but Vo still remembers their friendship fondly.
To get through the difficulty of his own prognosis, Vo found a haven in humor.
“I was basically like a pregnant woman; I would want something then the next second I wouldn’t want it anymore. But I knew I had to be positive, so every time the nurses came in I would crack jokes with them,” Vo said.
But later that fall, he received the news that every cancer patient dreams of hearing: he was in remission.
“It was actually a surprise. The doctor told my parents and they had a big party at the hospital where they all told me that I was in remission,” Vo said.
If there was one positive thing that resulted from the experience, it was that Vo became closer with his family. As the middle of five children, it was not uncommon for him to feel overlooked.
“We definitely got closer together. They would try and cheer me up and we talked a lot more,” Vo said.
Now, Vo finds himself with an opportunity that not many people have the chance to get: a new life.
“Since I have a second chance, I want to do better, so I started volunteering more. I feel like I have to fulfill myself,” Vo said.