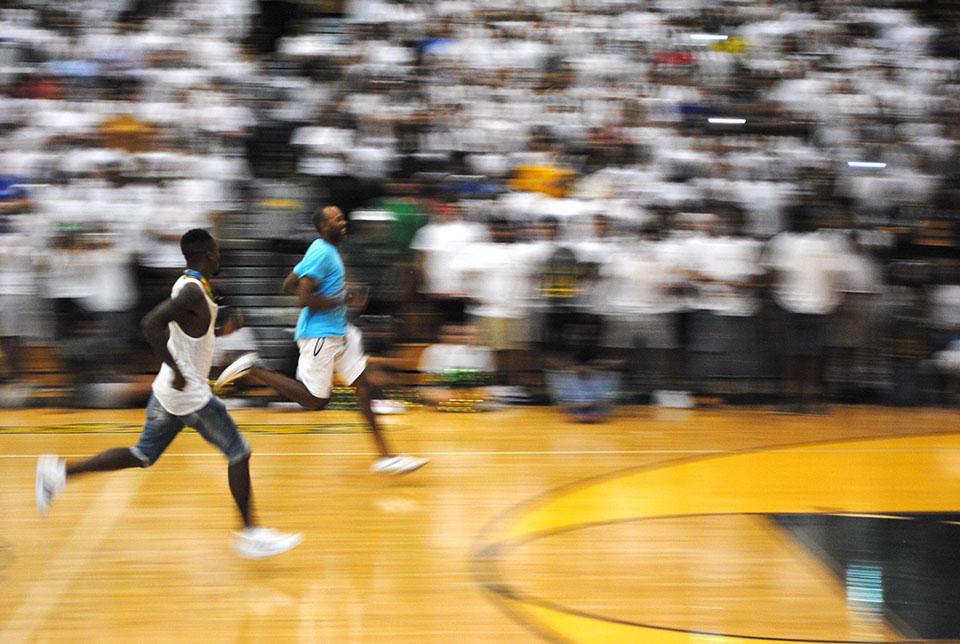 Tony Mcquay followed the yellow brick road back to Suncoast because there’s no place like home(coming).

When Tony Mcquay was in eighth grade, he really wanted to go to Palm Beach Lakes High School.
“I came to Suncoast because my mom wanted me to and I didn’t get into Lakes,” Mcquay said.
But once he started Suncoast, he realized that he enjoyed it and all the extracurricular activites that came with it, even though he was not the biggest fan of showing up to track practice.
“Sports had a big effect on my high school experience, because it kept me active, I got to meet new people, and I liked the competitiveness behind football and track. But I definitely liked football more- I didn’t like track in high school,” Mcquay said.
Mcquay went on to run in the London Olympics in 2012 and the Rio Olympics this summer, but his illustrious running career began in sixth grade at Roosevelt Middle School.
“My mom was big into track and field and after band season I wanted something to do after school, so I joined the track team at Roosevelt,” Mcquay said.
At Suncoast, Mcquay was an active student who joined the band, played football, and ran track, where he met the largest influence on his career, Coach Carnell Coleman.
“He tried to kick me off the team because I would always come late. He had plans for me though, so I just believed in what he said and I ended up going to states my senior year,” Mcquay said.
After graduating from the IDP program in 2009, Mcquay began running at the University of Florida, a place where he found that he was able to make a living off of the sport he loved.
“I ran there three years, then I went pro my junior year. I didn’t really get the full college experience because I was gone a lot but it gave me a chance to grow and learn about the sport more,” Mcquay said.
By his junior year, Mcquay was sponsored by Adidas, so he left school to train full time at an Adidas camp for his professional career. The extra training paid off because soon, he made it to London.
“I never had dreams of being in the Olympics, but once I got established in college, I realized that this was what I needed to do,” Mcquay said.
Mcquay came to London at age 22 with the excitement of a first-time Olympian, but the nerves of an athlete who had competed professionally before. He left London with a silver medal.
“London was the best experience because it was my first and it was more of a learning experience. I was used to being on a big stage so it just felt like another meet. It wasn’t until after it was over that I realized what I did,” Mcquay said.
His success did not stop there; four years later Mcquay went to Rio and brought home a gold medal.
“I got the chance to see all my former teammates from London amd spend time with Team USA . It was definitely a much better feeling getting gold,” Mcquay said.
The next stop for him: Tokyo 2020.
“I want to go to Tokyo, so my plan is to prepare for that as soon as Worlds are over ,” Mcquay said.