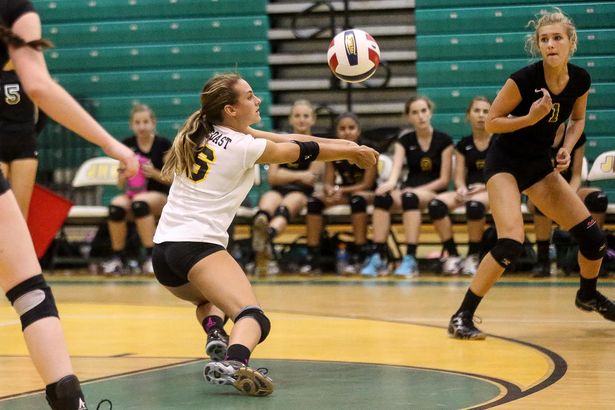 Although Suncoast mostly focus on the big sports, such as football and basketball, the volleyball team has been dominating this season. Behind a great team there is a great coach.With the help of their head coach, Karen Bowman, the volleyball team has a record of 14-7. Coach Bowman has played volleyball for pretty much all her life, which inspired her to sponsor and coach the girls volleyball team for the past 11 years.
Most of the girls have been playing volleyball for years and some are even on traveling teams. “I’ve been playing volleyball for 5 years now and just loved the sport ever since,” varsity volleyball team member Taylor Stevens said. While skill is always an important aspect of the game,the team’s overall friendship is what has made them so successful.“They are friends before players,” Bowman said, when asked about the team’s relationships outside of the court.
According to their record, this season has been great, but there have been a few bumps in the road. Oxbridge, their rival, tarnished their perfect 7-0 record, and the team’s confidence took a big hit. The team took a step back and Coach Bowman began to rethink her plan going forward. “We started to lose our momentum and lost four games in a row,” varsity volleyball co-captain, Isabella Keiser said. Some of the players began to doubt themselves and their capabilities. “Losing against Oxbridge made me upset, because I know we could have played a lot better, and shouldn’t have lost in three straight sets,” volleyball player Miranda Thelus said. Nevertheless, behind the stout leadership of the team’s co-captains and their coach, they were able to get back to their winning ways.“We fell off for a little bit, but now we’re back on track,” Coach Bowman said.
During their spell of losses, it was up to the team’s co-captains to help keep the team motivated. Although it is a tough job, Keiser enjoyed it the most because she supported the team and helped them succeed by encouraging them. Becoming co-captain with Valentina Supper was a dream come true for Keiser. “I was really excited to be named captain because I have been on the team since freshman year and I have been waiting for the opportunity to be a leader,” Keiser said. Even though the team has had a few setbacks, they plan on keeping their record up and going on to districts.