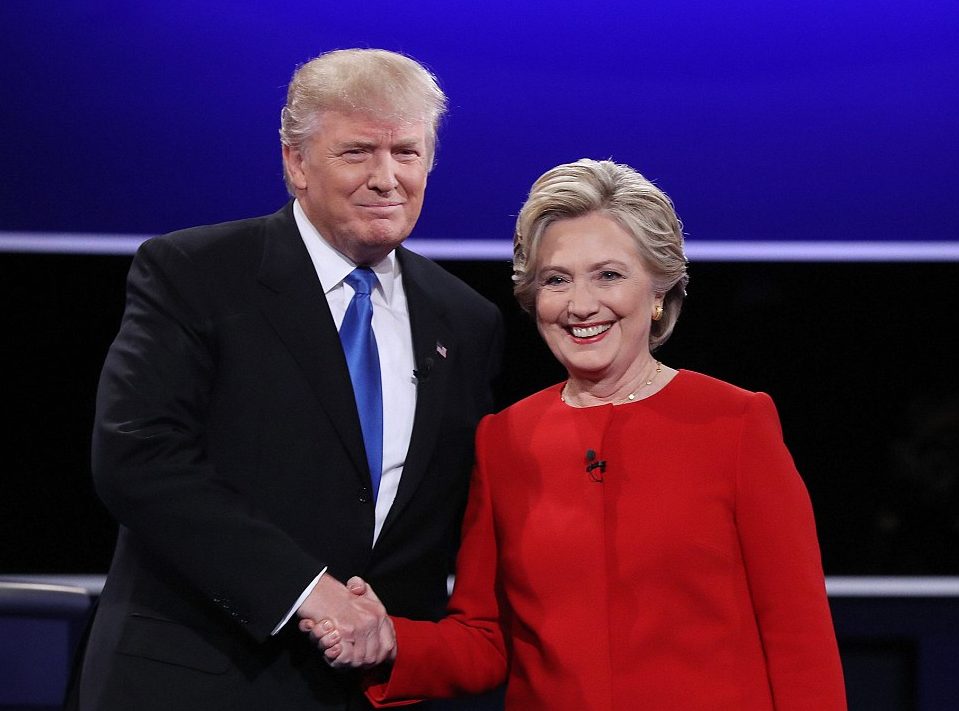 SPOTLIGHT ON THE CANDIDATES

When the time to elect our president finally rolls around, who are you voting for?

Every four years in the United States of America, we all face a similar dilemma: electing a new president for our country. However, this is an election that will definitely go down in history, and for several reasons. If Hillary Clinton is elected, she will be the first female president, but if Donald Trump is elected, he will be the first president without prior political knowledge. The real reason why this election is so controversial is the drama surrounding it. Both candidates have had their fair share of embarrassing moments and past mistakes that make the public laugh or question their ability to have such high level of power. The entire country is split over who to elect. Clinton has 47.7 percent of the vote and Trump has 42.2 percent, according to a recent RealClearPolitics Poll Average, and some people refuse to vote at all.
Donald Trump has been well known for his offensive comments towards women, even at the beginning of his campaign. Just recently, a video from 2005 was leaked where he makes lewd comments about women to Billy Bush, and The Telegraph even has an up to date running list on every public statement Trump has said that is sexist, starting in 1990. Many people also argue that he is racist, because of his early campaign promises to build a wall between the U.S.A. and Mexico, deport all illegal immigrants, and his intolerance for Muslim refugees. The Huffington Post also has another list list of racist comments and things Trump has done, starting with “Attacked Muslim Gold Star Parents” and “discrimination against black people” being part of the 13 examples.
Both Clinton and Trump have well known campaigns, and both have faults.The Clinton Foundation has donated $23.2 million since 2001 to charities, while the Trump Foundation has only donated $3.9 since 2001 to charities, reports the Washington Post. News Examiner even calls him, “The Least Charitable Billionaire In The World.” The Clinton Foundation, which is a major part of her campaign, has also been taking money from countries such as Saudi Arabia and United Arab Emirates (including Qatar and Oman), where women and homosexuals have virtually no rights. “In Qatar, marital rape is permitted… [and] as for Oman, the country punishes same-sex acts by up to three years in prison,” according to Plolitifact.
Hillary Clinton also was enveloped in problems of her own in the very beginning of her campaign, the most prominent being her well known email scandal, where she had her own private server for her email as Secretary of State. Wikileaks has been releasing these hacked emails and they could have potentially posed a threat to the United States’ security. Even Clinton, the potential first female president, is not free from being accused of not being as supportive as women as she says she is. According to BBC, after Bill Clinton’s affairs with Monica Lewinsky, Gennifer Flowers, and more women, Hillary probably had a helping hand in “destroying their reputations.”
Politics are not normally associated with jokes, because running a country is a serious job, but this 2016 election has had plenty more than its fair share of jokes and Internet memes. Outside of their tense debates, the candidates even poke fun at each other, for example, when Clinton tweeted “Delete your account,” to Donald Trump and started a “Twitter War” with him, and Trump nicknamed his fellow candidates things like “Lyin’ Ted Cruz” and “Crooked Hillary.” Social media sites like Instagram and Twitter are buzzing with jokes that poke fun at the candidates, too. In the second debate, a fly landed on Clinton’s face, and now that fly has its own Twitter account. Trump is commonly made fun of for his looks, specifically his fake and wispy looking hair and his orange spray tan. Plenty of comparisons have been made to his looks, and some pictures even portray small, yellow-haired animals running away from Trump’s head, as if his hair is seeking a better life. Commonly found memes on Instagram depict the despair that the country is facing with the two candidates, and The Daily Mail even posted a picture captioned “When you laughing at Hillary and Donald arguing on #DebateNight but then you remember that one of these two is our next president,” under a picture of Steve Harvey laughing and crying simultaneously.
This election is not only relevant to The United States, but various other countries from around the world. According to British journalist Timothy Stanley, “Trump has been criticized by the Prime Minister, and members of Parliament debated banning him from Britain.” Russian journalist Mikhail Fishman reported “…Vladimir Putin looks at Mr. Trump — a populist who seems willing to throw the usual values to the wind — as his natural ally, and a potential vehicle for his own global interests.” Whomever is elected president of the U.S., which is an extremely influential and powerful country, will surely have an impact on the whole world.
Both candidates have their pros and cons, and many people this electoral year say that they must choose between the lesser of two evils. On November 8, the United States will finally decide who to elect: Donald Trump or Hillary Clinton.