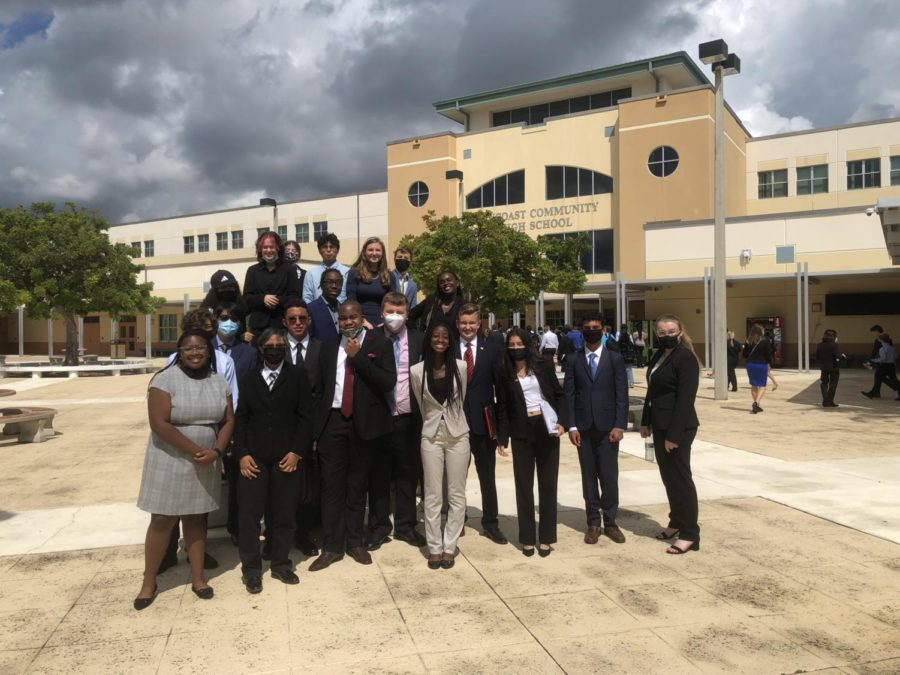 Suncoast Speech and Debate Team poses for a group photo outside of their school before the start of a tournament.

Suncoast hosted the first in-person debate tournament in 19 months. Over 300 competitors from schools across Palm Beach and Martin Counties attended the tournament on September 25. Thirty-eight members of the Suncoast Speech and Debate Team competed, with ten of them ranked top six or higher in their respective chambers. The Palm Beach Catholic Forensic League organized the tournament where debaters replicated congresspeople, argued bills and resolutions, similar to the United States Congress.

Last year, all tournaments were held online during the 2020-2021 debate season. For many varsity members, this tournament was their first time debating in person. However, restrictions were still in place due to Covid-19. All competitors were required to wear masks and had assigned seats in their respective rooms. Yet, most competitors found in-person tournaments to have a better debate atmosphere.

Sophia Osborne (12), president of Suncoast Speech and Debate Team, said, “Online tournaments take away that aspect of spontaneity because you can just google stuff and have your speech open to read.” In-person tournaments also have a social aspect that cannot be replicated online. “In-person tournaments are a much better environment to make new friends in debate,” Osborne continued.

Emily Cuba (10) ranked second at the first debate tournament she ever competed in. She always wanted to debate, but never got the chance until this year when she decided to pursue her goals and join the debate club. Debate has helped Cuba expand her speaking skills.

She said, “It also helps you think on your feet because during cross examinations, where after you give your speech you give some time for other debaters to try and poke holes in your speech, you have to think on the fly.”

Congressional debate was Cuba’s favorite debate event because she enjoyed the political discourse in each session. “I also like watching the actual members of congress vote and give their speech, so it’s cool to pretend to be a member of congress,” Cuba said.

“I was so proud of my novices. I have been with them since they didn’t know what debate was. Look how far they’ve come now,” Osborne said, who has been working with novice debaters since the start of the school year.

Another first-time debater was Sree Tadepalli (10) who ranked first at the tournament. Tadepalli joined debate because of the adrenaline rush that it gave him when he was able to share his thoughts and feelings with other students like him. “I felt really exhilarated because it was my first time winning anything in a high school competition,” Tadepalli stated. Similarly, Tadepalli reaped the benefits of participating in debate, socially. He believed that debate, “has helped me make new friends because I get to interact with a lot of new people and get to experience a lot of interactions.” Tadepalli would “absolutely” do debate again, “because it was an incredible experience,” he said.

Varsity members, those who have competed in speech and debate for more than a year, also competed in the tournament. Peter Torocsik (10), who competes in Congress and Public Forum debate, told novice debaters, “Don’t procrastinate when writing speeches because when you write speeches in a rush, they are lower quality.”

Another varsity debater, Anyla Williams (10), who specialized in Oral Interpretation, said that she changed dramatically since she first started debate in 2020. She ranked fifth in the All Congress Tournament.

“I’ve been more open to different perspectives since joining debate because debate requires you to understand both sides in order to form an educated opinion,” Williams said.

Osborne encouraged anyone interested to come to debate club: “…go to the meetings in Ms. Lowe’s room on Tuesdays and Thursdays…The season is just getting started!.” So, did Andrew Hynes (10), who valued debate for what it is, “It’s hard work, but it’s definitely worth it because colleges look at it.” Suncoast Speech and Debate Team will continue to compete throughout the year.