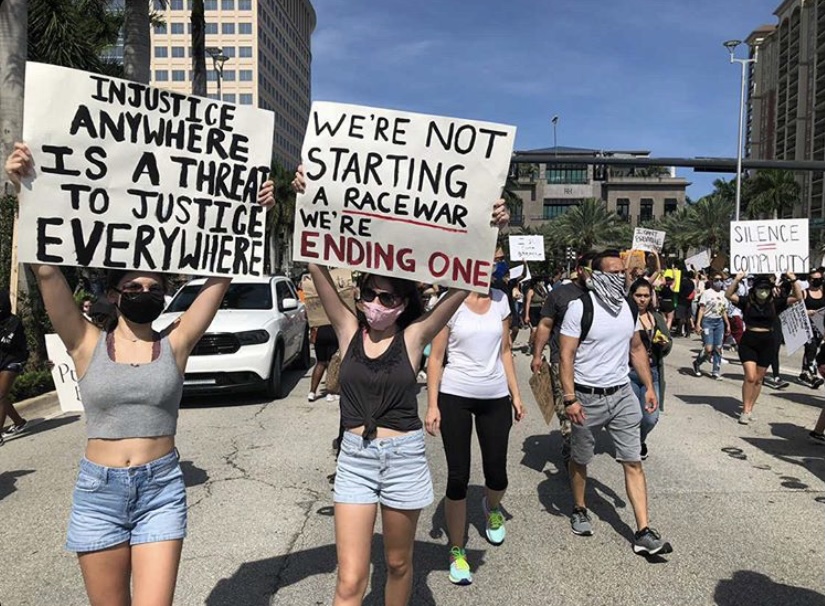 The role of the school district with the BLM movement is more important than ever before.

In quarantine, the students have seen it all. They saw bingo cards on Instagram stories detailing what they had done during the break. They saw oversized or “murder” hornets threaten their well-being. They saw a pandemic disrupt their livelihood. Yet, Generation Z, who has now survived the most traumatic of summers, has yet to see justice for the black community. While they  were busy protesting, signing petitions and raising awareness, the School District of Palm Beach County strategized a way to bring the change-makers back to school. Tending to the creation of social distancing rules at school and during lunch, the school district seemed to forget about this fairly important subject matter that dealt with their own students. The district’s statement regarding the Black Lives Matter movement, or the lack thereof, triggered a multitude of responses among Palm Beach County students. Ultimately, the consensus is that, as one of the most “progressive” school districts in the state, the SDPBC’s involvement with the BLM movement has left much to be desired.

At Suncoast, the administration and staff are preparing students to be the future leaders in science, technology and among many other subjects, humanitarian issues. The Charger family is diverse, with our makeup being around 36 percent White students, 24 percent Black, 22 percent Hispanic and so on. Understandably so, when students returned to campus this September, many were appalled to hear no mentions of BLM.

“I am not surprised that the SHS administration didn’t speak up on the issue since that has never been a subject of their focus, but I did expect them to at least make some sort of statement during the BLM uproar in early June,” Castelin, Historian of Suncoast’s Black Student Union (BSU), said.

Interestingly enough, Castelin’s thoughts about a lack of recognition among administration bring up a good point. Around March 15, 2018, one short day after the tragic shooting at Marjory Stoneman Douglas High School, former Suncoast principal Karen Whetsell held a moment of silence for those impacted by the shooting over the intercom. While in no way is this notion, or those that followed, such as the MSD walkout, considered unwarranted, it does beg the question: where was the moment of silence for George Floyd, or the several other black individuals who fell victim to police brutality? Moreover, where was the walkout for Cornelius Fredericks, the 16-year-old boy who died after being restrained in a foster care facility simply because he threw a sandwich. The activism promoted and supported by Suncoast administration is apparent until it involves black people, black children, being murdered. The students understand that these are “unprecedented times”; however, some feel as though this is no excuse for completely disregarding the movement, a movement that was introduced to many new audiences during quarantine. Is Suncoast really to blame though? While many Chargers are disappointed by the lack of initiative, these orders need to come straight from the district. That way, there is a uniform response among all schools in the county. Dr. Joseph Lee, the North Regional Instructional Superintendent for Secondary Schools reported that there were great moments of dialogue among principals and the SDPBC, yet none of those conversations seemed to transcend to the students themselves.

“We are very proud of the work we’ve accomplished so far,” Lee said,  referring to the manner in which the school board analyzed suspension disparities among black and brown students, as well as encouraged those students to enroll in Advanced Placement, Dual Enrollment and International Baccalaureate courses. Lee maintains that the district has many plans for the upcoming future. “We have to do more than graduate our students,” Lee admitted.

In a time where being not racist is simply not good enough, some can not help but to agree with his statement. There comes a point in time where we have to reflect within ourselves to truly see how our actions can impact the world around us. Dr. Lee expressed these very ideas when he asserted that “wording is everything.”

“As opposed to just laying a slogan down, I think actions are more important in terms of what work is coming out of the movement,” Lee said, explaining why the district has yet to, and will most likely not release a statement about BLM. While these ideals are rooted in preventing performative activism, students believe that this mindset might be giving too much of a free pass to those who are uneducated about police brutality. Considering that most of their initiatives to spread equality go on behind the scenes, the SDPBC is, without knowing, enforcing racist tendencies. For example, a student could continue to respond to chants of BLM with the statement “All Lives Matter” and because the district does not outright support the movement, they would see nothing wrong with these responses.

Lee continued to explain that “We’ve had to be cautious about any type of political symbols that are worn that could be offensive to others,” referencing both BLM and All Lives Matter shirts and masks. This justifies the question of where the line can be drawn when restricting political involvement in schools. For example, here at Suncoast, newly formed clubs such as Turning Point or Students Demand Action have been created, with both having clear political affiliations. Yet, a student’s ability to wear a BLM shirt or mask on campus has to be treated with caution. The hypocrisy of what is being categorized as “political” by the district is shocking. While their intentions are clearly from a place of fairness, their delivery seems anything but so.

Ultimately, the SDPBC is working hard to ensure that every student has equal opportunities and access to education. This is something that cannot be taken away from them. Nonetheless, the students feel that, as the future leaders of the free world, they need to be supported in their fight against racial injustices. It can be difficult to plan a BLM event, like one that the BSU is conducting, without definitively knowing where the SDPBC stands. Even if they were straying away from being too political, it would have been possible for them to make some sort of statement about the deaths of George Floyd, Ahmaud Arbery, Breonna Taylor, Elijah McClain, Rayshard Brooks, or the many other victims of police brutality, while making no mentions of the BLM organization.

The work that the SDPBC has shown so far is a great start. Raising graduation rates among black students, and rescinding suspensions based on race are undeniable steps towards equality. Dr. Lee even referenced an African American, Holocaust, Latino and Gender Studies board created to promote diverse education. Finally, focusing on actions rather than slogans, like BLM, seems like a good practice; however, the students see silence and this silence speaks much louder than words.

To combat these issues, communication between the SDPBC, the schools and students needs to be strengthened. Note how the students are included. How would it be possible to attempt to tackle such a huge issue like police brutality or racism while not encouraging the students to get involved themselves?

Dr. Lee words it best when he says “We’re all in this fight together.”It will take some time and major conversations to be held before actual change occurs. When it does, though, the students will be excited and what’s more, welcoming. Until then, they will continue to identify places where improvements can be made in hopes of a more conscious county, and a more accepting community of learners.