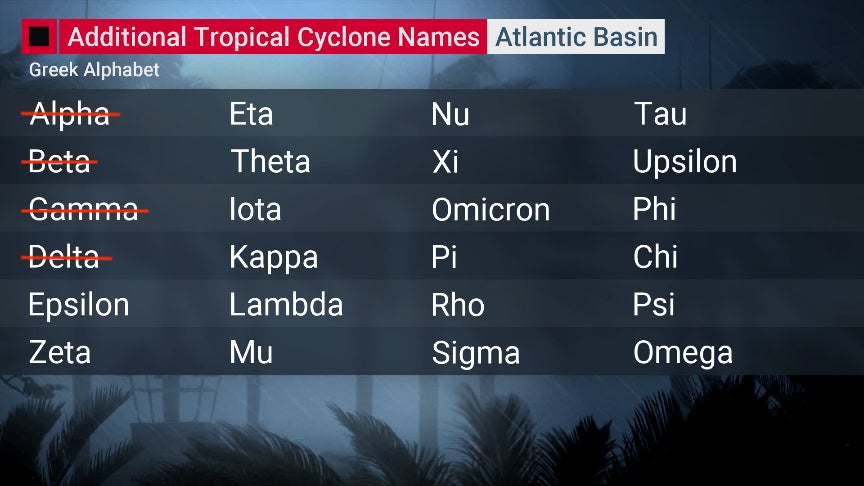 THE YEAR OF THE GREEK

This year’s hurricane season is on pace to break records.

In the midst of this year, a lot of odd occurrences have taken place; Easter Sunday tornadoes in Alabama, the gender reveal forest fires in California , talks of 2020 being the warmest weather on Earth and the Gulf of Mexico was no stranger to hurricanes this season. Hurricane Arthur kicked off the first storm in the Atlantic Ocean, and the Gulf of Mexico proved to be a magnet for future storms to come. Andrea Thompson, of Scientific American, claims that “All along, we knew this was going to be an active Atlantic hurricane season. The waters are very warm, and in the Gulf of Mexico right now, they’re some of the warmest on the planet.” It did not take long for the list of storms to go from names starting with letters from A to Z. With storms being no strange to hurricanes, weather experts turn to the Greek alphabet for the second time since the US began naming storms. We started with Alpha and we are on to Delta, which is currently spiraling towards the Gulf Coast of the US. Jonathan Erdman with the Weather Channel notes another interesting fact made from the long line of storms formed this year. “August 15, 1893 was the only other day in which three storms formed on the same calendar day.”  This year, – hurricanes Wilfred, Alpha, and Beta all formed on the same day.

This year there were many storms that were produced in the Atlantic that forecasters turned to the Greek alphabet to keep up with all the storms. Names are chosen by the World Meteorological Organization years ahead of time. There were only 21 names on this year’s list. Forecasters started using Greek alphabet names to keep the list going. The last time this happened was in 2005, when 27 names were given. The alarming number of storms has prompted authorities to stress the urgency of staying one step ahead of the weather.

While residents in the South brace again for another storm, one can only wonder why Americans are seeing an increased number of storms this year. Bob Henson, writer with the Washington Post explains one reason that is adding to the rise in numbers. “La Niña, a semiregular cooling of the eastern tropical Pacific, tends to reduce the wind shear that can impede Atlantic hurricane formation.” As La Niña continues to make its presence known in the Atlantic, meteorologists are certain to see more storm formations through the remainder of the hurricane season, which ends Nov. 30. As stated by NOLA.com,  Latoya Cantrell, Mayor of the city of New Orleans urged residents to be vigilant. “Today, we want folks to get ready and get prepared. The impact is expected as early as Friday morning.”

La Niña is not the only culprit behind the increase in storms. Climate change also shares the credit for making the Earth’s waters warmer and more turbulent, providing the perfect mix for a year to remember. Henson goes on to note, “Sizzling oceans, supercharged by climate change, may be an even bigger factor. Most of the tropical and subtropical Atlantic, including the Gulf of Mexico, has run warmer than average through the season, with sea surface temperatures (SSTs) at or near record values in some areas.” For many people in the Gulf, this year’s highly active hurricane season brings quick reminders to another year that’s hard to forget, 2005.

The city of New Orleans has had its share of devastation from hurricanes. It was in that year when Hurricane Katrina set its sights on the Crescent City, causing billions of dollars in damages while claiming thousands of lives in its wake. The gloom of Katrina continues to overshadow the city, forever reminding residents of its wrath, while drawing the importance of always staying one step ahead of the weather. Officials in New Orleans are keeping a watchful eye on Hurricane Delta in hopes to prepare their residents for what could be a catastrophic storm. While the country has yet to see the plans that Delta has for the Gulf Coast, weather experts will continue to rewrite the history books. For a hurricane season that wasted no time to go Greek, 2020 without question will certainly go down as a year unlike any other.