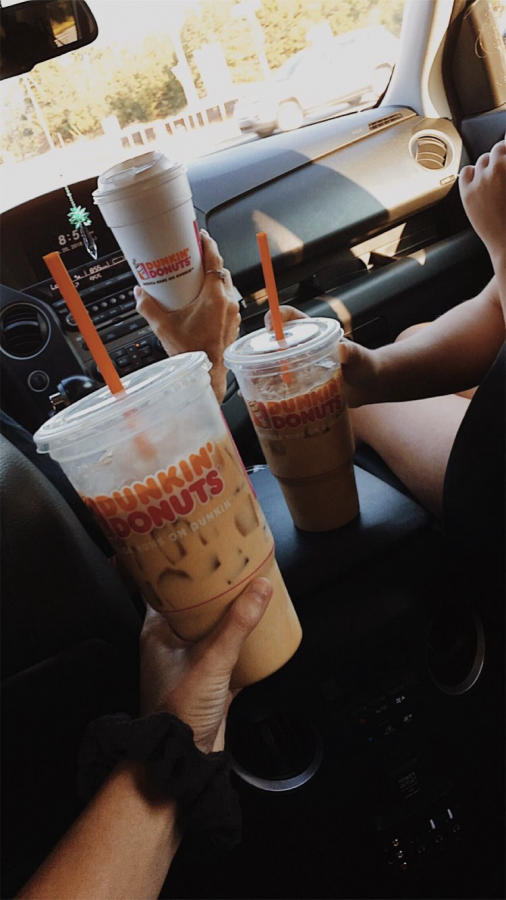 AMERICA RUNS ON DUNKIN’ AND SO DOES CHARLI D’ AMELIO

As leaves fall and the seasons begin to change, so do the menus. Dunkin Donuts has added a new, limited time only drink to the menu, called “The Charli.” It consists of cold brew with whole milk and three pumps of caramel swirl. The 24-ounce drink has 200 calories, 1.5 grams of fat, 41 grams of sugar, and costs $3.19.

With Dunkin endorsing the new drink, they have made it available both in stores and online on the Dunkin app. However, many question if the drink is healthy compared to the other beverages Dunkin has on the menu.

“It’s really the sugar that concerns me with any specialty coffee drink since typically 100 percent of it is considered added sugar,” Kristin Kirkpatrick said. A nutritionist who leads the Wellness Institute at the Cleveland Clinic in Ohio.

Compared with other drinks, like a Frappuccino, which has 59 grams of sugar and more than 400 calories, or a pumpkin spice latte that has 52 grams of sugar, 14 grams of fat, and 380 calories, “The Charli” is somewhat healthier but still very high in sugar.

“I’d caution teens that this is a ‘sometimes food’ to be enjoyed on occasion,” Kirkpatrick said. “This drink has 10 teaspoons of added sugar, so it’s more sugar in a drink than you should have in a day.”

The recipe is understandably something a 16-year-old would sip for a sugary treat, and not an everyday morning pick-me-up. Especially, when the American Heart Association recommends consuming no more than 25 grams of added sugar for women, and no more than 36 grams for men, each day.

Teenagers have described the new drink Dunkin’ has added as being okay. “It’s nothing really special, it’s just an iced caramel latte, but I didn’t really like it because it was too sweet for me,” junior Daniel Reynoso mentioned.

Junior Arabella Hertelendy said, “I was a bit disappointed. It’s just a drink that people already ordered that was named after Charli. I thought it would be something new and exciting but it was kinda boring.”

While, junior Hailey Birdsall said, “When I first tried it, I thought it was pretty good. Especially since I drank “The Charli” in less than an hour.”

With the amount of caffeine and sugar, she processed it became physically alarming to her when she was halfway finished with the drink.

Birdsall mentions that “It was probably not the best idea to finish the drink so fast, since I was up all night, but I’d definitely get it again.”

The drink itself is not a new creation but if you like cold, sugary coffee drinks then “The Charli” might be worth a try. Since the drink has no added health benefits it could potentially spike your blood sugar if consumed daily. Nutritionists do, however, advise you to not make it a daily drink and to instead view it as a desert or a treat.