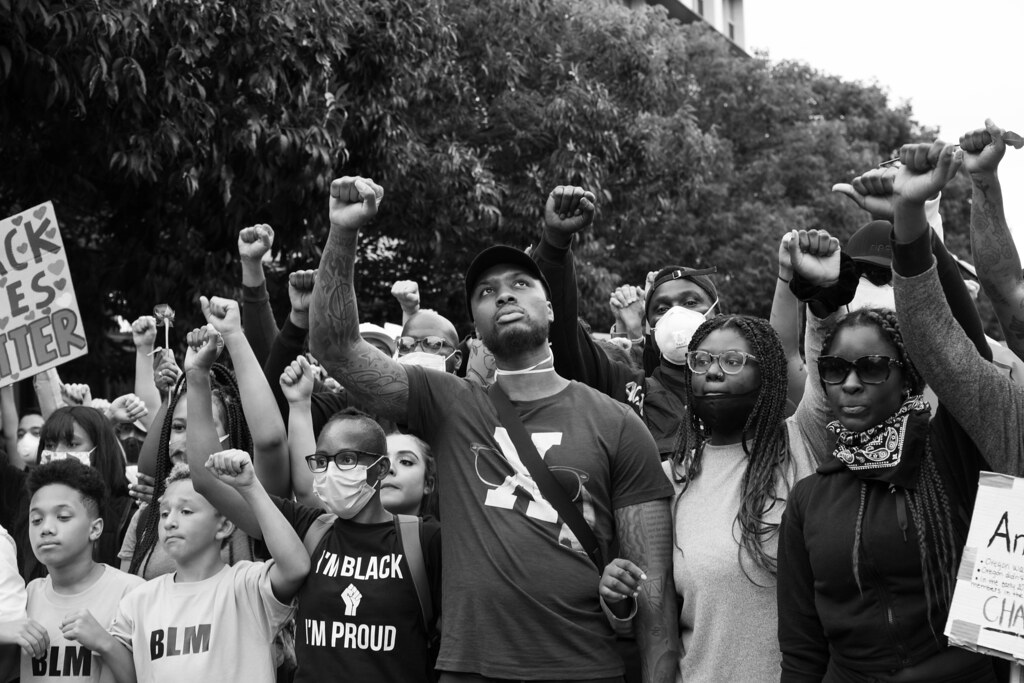 Damian Lillard of the Portland Trailblazers (center) with protestors in Portland, Oregon.

Athletes are using their positions to promote social and racial justice.

The recent killings of Ahmaud Arbery, Breonna Taylor and George Floyd have sparked a resurgence of the Black Lives Matter movement that has coincided with the restart of sports. This was a source of conflict for many athletes as they wanted to play the sport they love, but did not want to detract any attention from the movement. Most athletes, though, decided to return once they were able to advocate for social and racial justice as they played.

Prior to the restart of the National Basketball Association (NBA) season, there were concerns over how the NBA bubble at the ESPN Wide World of Sports Complex in Orlando, Fl. would work, and how players would be able to fight for social and racial justice within it.

To address these concerns, the NBA and the National Basketball Players Association (NBPA) agreed upon several social justice initiatives like painting “Black Lives Matter” on the basketball courts; allowing players to have social messages on their jerseys; including the phrases “Black Lives Matter” and “VOTE” on their warm-up shirts; and permitting players to kneel during the National Anthem.

On Aug. 23, 2020, when an unarmed black man named Jacob Blake was shot seven times in the back by a police officer in Kenosha, Wisconsin, many people, including players and coaches, were angered.

During his media time on Aug. 25, 2020, former Los Angeles Clippers Head Coach Doc Rivers, emotionally pleaded, “We keep loving this country, and this country does not love us back. It’s really so sad.”

Following boycotts of NBA games from Aug. 26 – 28, the NBA and NBPA released a statement expressing their commitment in creating a social justice coalition; attempting to turn every arena into a polling location; and making more advertisements that encourage voting.

Of these commitments, Senior Joshua Timmer, who is an avid NBA fan, thought that opening polls at stadiums was the most effective initiative. He explained how this is “vital in making change for the better [as it allows] everyone to have the opportunity to vote and make a difference.”

The WNBA restarted its season with its own bubble at the IMG Academy in Bradenton, Fl. Like the NBA, the WNBA had “Black Lives Matter” written on their courts. On the front of their warm-up shirts, WNBA players donned “Black Lives Matter” while on the back, they had the phrase “Say Her Name.” WNBA players also wore uniforms with Taylor’s name to bring attention to her death.

Phoenix Mercury Guard Skylar Diggins-Smith elaborated, “I’m trying to use my platform for good, for change and for reform. To speak for people who feel like they’re not being heard. If it sounds like I feel some sort of way, it’s because I do. I can’t hide it. Maybe I’m just wearing it on my sleeve right now.”

On July 6, 2020, the WNBA, along with the Women’s National Basketball Players Association (WNBPA), launched “The Justice Movement” and created a new Social Justice Council.

In their statement, the WNBA explained that the purpose of the Social Justice Council is to “be a driving force of necessary and continuing conversations about race, voting rights, LGBTQ+ advocacy, and gun control.”

Sophomore Neha Jagadish described how “it is amazing that the WNBA is taking part in activism like this. BLM is fighting for human rights and fair treatment, so why shouldn’t [the WNBA] support the movement?”

Professional tennis player Naomi Osaka brought national attention to racial injustice during the US Open Tournament. For each round of the competition, she wore a face mask with the name of a victim of racial injustice.

Osaka said, “I have seven [masks], and it’s quite sad that seven masks isn’t enough for the amount of names.”

Jagadish stated that Osaka doing this “allow[ed] for her to spread awareness. Using her platform like this can empower people to start taking action.”

By using their platforms, athletes are ensuring that important issues are at the forefront of the nation’s agenda. While they cannot directly solve these issues, players are bringing much needed attention to them. Jagadish stated, “They can initiate discourse, allowing people from many walks in life to start discussing these topics, which is the only way to find solutions.”