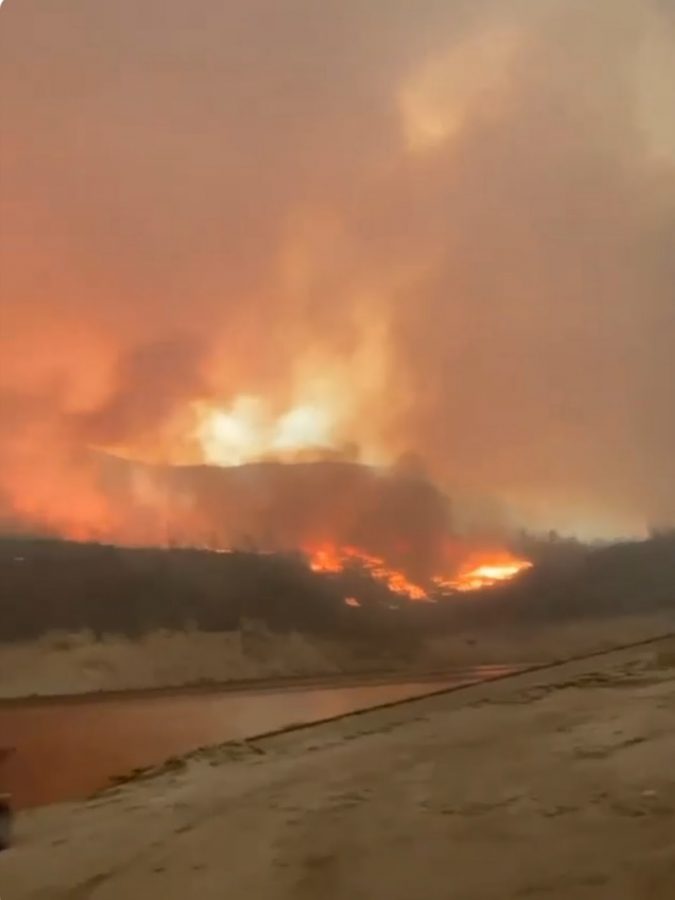 RAGING WILDFIRES IN THE WEST COAST BURN OVER 500,000 ACRES

A wildfire, caused by a gender reveal party mishap, has been raging in the west coast.

As if the Coronavirus was not enough, another major scale disaster is sweeping through the west coast. Multiple wildfires spreading over 500,000 acres have been ravaging through the state of California, destroying anything in their paths, including communities, homes and lives.

“We are experiencing weather conditions the likes of which we’ve never experienced in our lifetime,” California governor Gavin Newsom said in a press briefing. The wildfires have set a new record as the largest and most destructive in the state. They have also set the record for the largest number of dangerous wildfires. Six of the 20 most dangerous wildfires in California burned in the year 2020.

According to the state of California’s website, in 2020 alone, over 3 million acres have been burned, over 5,000 structures have been damaged and over 20 people have been killed. Wildfires have always been a major issue in California but due to the effects of climate change and a statewide drought, the fires are burning brighter and heavier than ever before.

“Personally, I am worried about the overall living conditions of California residents,” junior Carlos Landig said.

In total, over 20,000 people have been forced to evacuate due to the fires. The spread of the Coronavirus has put evacuation shelters at constant risk; overcrowding could increase California’s already high case count and cost many lives.

Landig has several friends and family members located in California who have been impacted by the wildfires. “I was personally very worried about their safety and wellbeing, especially knowing the fact that I might be the last one to ever talk to them,” Landig said.

It has been confirmed that at least one of the wildfires was a result of a gender reveal party gone wrong. A gender reveal party is a party where a couple announces the sex of their new baby, usually by having an explosive device blow up and reveal a pink or blue powder.

“Those responsible for starting fires due to negligence or illegal activity can be held financially and criminally responsible,” said The California Department of Forestry and Fire Protection in a statement. However, the couple responsible will not be charged until the wildfire is under control.

If charged, the couple responsible could face either a misdemeanor or felony charge based on intent. They also could likely be required to pay a percentage of the damages. A similar case occurred in 2018 where a man in Arizona started a 45,000 acre wildfire after setting off an explosive device at a gender reveal party. He was charged with a misdemeanor and required to pay almost 8 million dollars in restitution, according to the New York Times.

“I feel quite enraged at the people who, through their own ignorance and carelessness, have cost many people their lives and their homes,” Landig said.

A picture taken by one of Landig’s family members depicts the California sky turning vivid orange as fires rage through the golden state. Many California residents woke up to an eerie scene like it in their backyards.

“Seeing the sky glow orange like that would be insanely frightening,” Landig said. “It looks insane.”

Firefighters along the west coast are hard at work attempting to contain the fires. Nearly 16,500 firefighters are battling the blazes. The fires are expected to dwindle out as the cold and rainy season comes over the west coast.