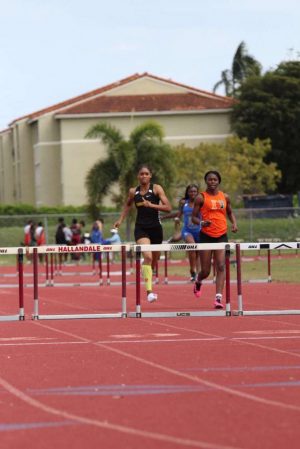 Coming from a family of track stars, Alicia Coleman was destined to become a track runner from a very early age. Having a father who not only ran track collegiately, but broke a few records along the way, helped in her decision to truly commit to the sport. As she enters her senior season for track she is mentally and physically prepared for the obstacles she will face along the way.

Coleman said, “My dad has been coaching track for years, so when I was 3 I started going to practice with him everyday and I grew up around the sport.”

Her dad ran track at Savannah State in Georgia and his main event was the 400M. He was able to run 45.2 in the open 400, and 44.9 split in the 4×400. Her dad has a lot of experience in track so when he began coaching, he was able to become a well known coach in the track community.

A multitude of people have come from all over the county looking to gain some of his knowledge on the sport in order to excel at it the way that he had.

Coleman said, “People pay my dad all the time to train with him and absorb some of his knowledge. Sometimes on the weekend, I go with him to watch him train others and I see his passion for the sport.”

“My dad thinks about track 24/7, I wake up to messages from him every morning about ways to get better and how to execute the proper technique. He makes me watch videos of a cheetah running in slow motion because cheetahs are the fastest mammals and if I could mimic the low heel recovery that cheetahs have, I could decrease my times,” Coleman said

It is very obvious how much love there is for track with Coleman’s dad which was inevitably passed down to Alicia with her passion for the sport being as clear as it has ever been.

“When I get on the line for a race, nothing that has happened before me getting on the line matters. The tears don’t matter, who I’m about to race doesn’t matter. At that moment, I just have to trust myself and my training and simply run.”

Despite the success that Coleman has been experiencing in the recent seasons, it is difficult to maintain such a positive mentality 100 percent  of the time. When running track, a runner will face a lot of the same people which can cause them to understand the weaknesses of each person they will face.

“My biggest thing is that I am my biggest hurdle. I used to always doubt myself and I was afraid to run fast because running fast hurts, but so does running slow. Once I realized that I was capable of being great, nothing else could stop me but me.”