For the seniors on the football team, this would be the last Friday where they take the field. As the last game of the season was fast approaching, the seniors were beginning to look back on the last 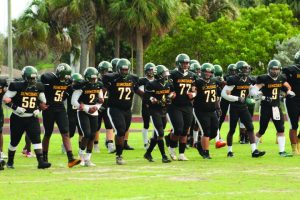 four years and what it would mean when the whistle blew for the last time. While senior night is a celebration of what the seniors have accomplished throughout their time on the team, most of them were not looking forward to that night as it was a painful reminder that this was the end of their high school career. A lot of the players were very dependent upon football as a means of escaping their everyday struggles with school as well as life in general. For a lot of these players, football was a way that they were able to overcome a lot of the diversity and hardships they faced. Senior captain Tyler Lewis said, “I wasn’t looking forward to the game because it means that everything we have worked for was coming to an end. It’s a huge part of who I am and I’m not ready to let it go yet.” As the team prepared for their eventual 21-7 win over West Boca High, emotions were running high as the severity of it all was setting in. Football created a family-like environment for the players as well as friendships that would last a lifetime. It opened the door to a world of opportunities that will help the players for years to come. Senior captain Aaron Adams said, “I am so grateful for what football has gotten me. Without my team and coaches, I would never have received the offers I did and I never would have committed to play for the Army.” Coach 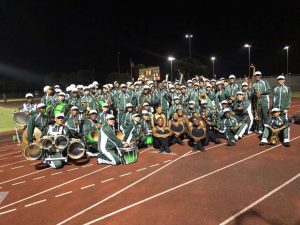 James Clark said, “Suncoast is truly a special place because of the people who give their time to make this program the best it can be.” For those who are not playing at the collegiate level, this was 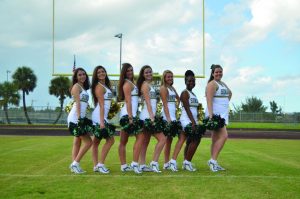 not only their last high school game but their last game ever. Despite not committing to play, football holds a special place in the players hearts, especially four- year varsity player Paul McCue. McCue said, “I only joined the team as a way to pass the time and stay fit for soccer but it became much more to me. I grew to love it and although it just ended, I already miss it.” Though senior night was mainly focused around the team, the cheerleaders and band had their senior night as well. When the football season ends, so does theirs, so for a lot of them it was the last time that they would be cheering and playing for the team. The cheerleaders’ season ends when football does, so for the senior  cheerleaders who are not doing competitive cheerleading, their days as a cheerleader are over. Senior Cheerleading captain Jaden Bartick said, “This team has allowed me to form friendships that will last a lifetime, and I will never forget the memories that came with it.”