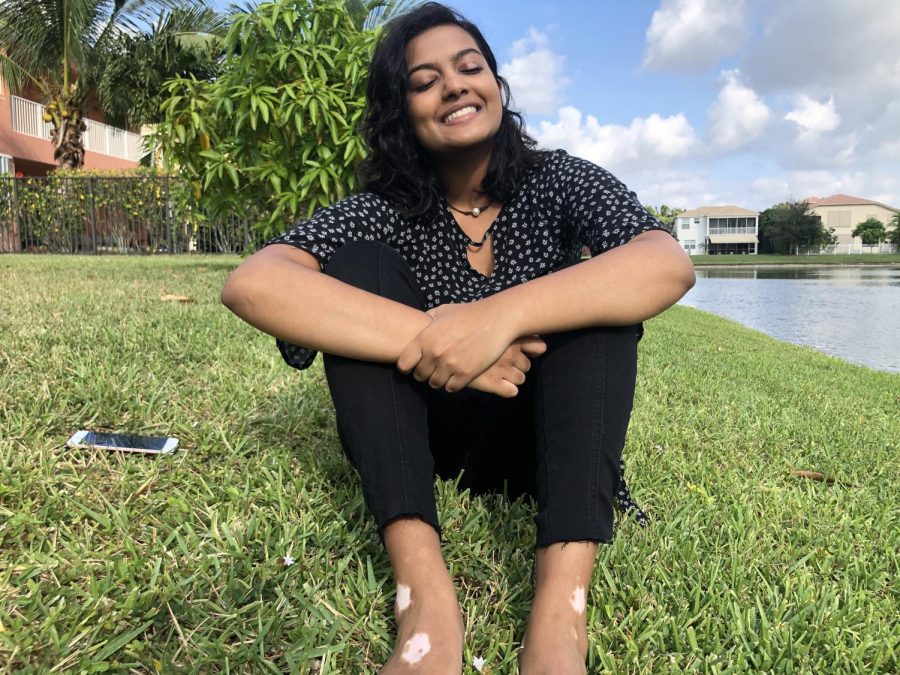 Neha Pakala learns to accept the incurable condition she once despised.

Wandering eyes turned to prolonged stares as the young girl walked through the grocery aisle. Mothers covered their children’s eyes as they attempted to make out the young girl’s unusual features. Knowing the reason for such behaviour, her heart began aching as she questioned whether or not the world could ever accept her. What was once an innocent day of grocery shopping now became a haunting memory.

The moments of her childhood when classmates and strangers judged her on a condition that she could not help forever changed Neha Pakala’s life. This condition, Vitiligo, is an incurable disease that causes parts of an individual’s natural skin to lose color. According to the United States National Library of Medicine, vitiligo affects “between 0.5 percent and 1 percent of the population worldwide.” With respect to the small percentage of affected individuals, the American Vitiligo Research Foundation claims that “in half of all vitiligo cases, onset occurs between the ages of 10 and 30.” For Pakala, her exposure to pigmentation occurred after coming back from a summer trip at age 7. What seemed like a small white spot began expanding.

“At first, it was just a tiny white spot on my left foot around the bone area so I thought it was no big deal. However, a week or two later, it started getting larger and a spot around the same area showed up on my right foot,” Pakala recounted.

With fear and concern, she was taken to a dermatologist, where she—for the first time—was informed about the disease. From her visit she learned about the incurable nature of vitiligo and how hers was subject to expansion by stress.

“I got vitiligo by dry skin and heredity according to the dermatologist, but I started stressing myself out for my entire elementary years, middle school years, and a few years of high school. Little did I know that the stress aggravated my spots, making even more appear everywhere. I started seeing spots on my arms, legs, and even my face. I got terrified,” Pakala explained.

Due to the expansion of her spots, and the rarity of her condition, Pakala found herself discouraged and scared for the future to come. She faced judgement from classmates and strangers, prompting her to become increasingly insecure and self-conscious.

“…a new girl came to my elementary school and the first thing she did was make a comment about my vitiligo. She made several kids shame me for my spots and made me feel little…This girl went to my middle school and continued to bully me up until my freshman year of high school when we parted ways. However, that still didn’t stop all of the constant dirty and terrified looks I got from strangers. I felt like a monster or as if I didn’t belong,” Pakala shared.

Pakala even faced challenges within her culture, as the skin condition prevented her from consuming her traditional Indian dishes.

“Since my family is from India, the main course we eat is Indian food. Almost every single Indian dish is made with a plant called turmeric. Turmeric irritates my [vitiligo], causing it to progressively spread. Not being able to eat traditional Indian dishes like my other family members and friends made it a real struggle, even today,” explained Pakala.

The constant judgement and fear of not being accepted within society quickly consumed Pakala’s mind. For years she battled with accepting the condition that weighed on her selfesteem. It was not until she discovered Canadian fashion model, Winnie Harlow, when her appreciation for vitiligo was ignited.

“I was scrolling through Instagram when I saw a modeling picture of Winnie Harlow. I was genuinely happy to see another person with vitiligo expressing their unique skin rather than hiding it. In one interview, she was asked how she dealt with vitiligo. In response, she expressed how it took time, but she needed to learn self-love in order for things to get better. I slowly began to realize that she was right and that I needed to learn to love myself before anyone else could. It took about [two to three] years of my high school career to finally accept myself for who I am” Pakala emphasized.

The confidence Pakala has gained over the course of her years has helped her not only develop a greater love for her skin, but also for the world surrounding. Remaining stress-free has been a key component of her confidence, further diminishing the severity of her spots.

No longer ashamed by the pigmentation, Pakala walks with her head held high, spreading nothing but positivity and happiness. Regardless of her past and the current societal beauty standards, Pakala now appreciates her skin and uses her experiences to positively influence those around her.

“I think it’s important to realize that as long as you love yourself enough, society can’t change you no matter how hard they try. I’m in this body for the rest of my life. There is absolutely no point in shaming myself for who and what I was meant to be. I might as well learn to love myself because I’m never leaving this body to become somebody else. It’s been a real struggle growing up with vitiligo, but in the end, it’s the main thing I’m most thankful for in my life because it helped shape who I am today,” Pakala positively replied.