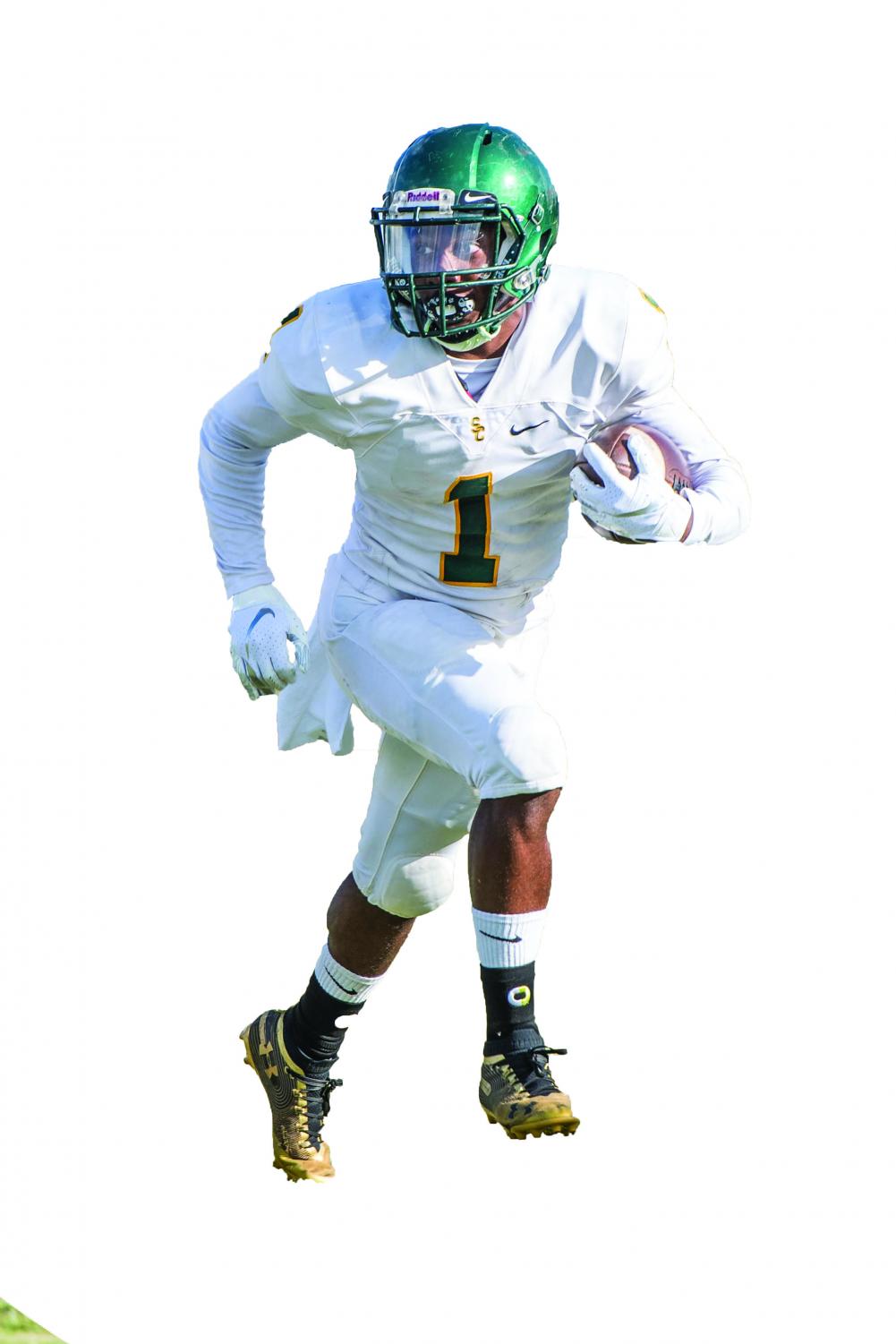 Sitting in awe on the sidelines of his older brother’s football game at the young age of six, senior Aaron Adams knew that this was something he could envision in his future. As his older brother was the athlete of the family growing up, receiving college scholarships and awards, he always aspired to follow in his brother’s footsteps and, hopefully, surpass him in his accomplishments. It was Adams’ brother who inspired him to pursue a career in football and continually work to achieve his goals.

Adams immediately fell in love with the sport before he even  began playing. With his brother as a major influence in his life, he built a strong work ethic and determination earlier than most athletes. His ambition and drive led him to achieve his goal of not only shining on the Suncoast football team, but taking his career to the next level in college by committing to the West Point Army division one football team, as part of the class of 2024. According to West Point Academy, the acceptance rate of West Point is 10 percent.

“I received offers from Jacksonville University and Ave Maria University but once Army came in and I weighed my options. I just felt like Army was the best choice for me,” Adams said.

The commitment process for potential college athletes typically begins in their sophomore year and ends at the end of their junior year. The process is an ongoing communication between coaches and athletes looking to be scouted. Athletes are constantly updating their athletic and academic statistics and accolades to the coaches as well as their game schedules for scouting purposes. The stress that most seniors are experiencing with the college application process is what Adams experienced in his junior year when he made his commitment decision.

“The commitment process itself was probably one of the most stressful times of my life,” Adams said.

The recruitment process of an athlete is drastically different from the college application process of a non-athlete. Adams had to ensure that he would be a good fit not only for the team, but for the coaches in the athletic setting. Athletes often go on official and unofficial visits of the schools of their interest in which they can get a holistic view of the team and coaches in their natural training environment.

“The whole team seems like one big family and a brotherhood as they have great chemistry, which was one of the major deciding factors in my commitment process,” Adams said.

Another major factor that Adams had to consider in his commitment was the academic setting and the academic programs West Point has to offer. Adams had to ensure that the college of his choice fits his academic needs for the future. This process is very similar to what non-athletes go through to set them on the right track of their profession to reach their professional goals post undergraduate school.

As soon as my football career is complete, I will have received a top notch education and great job opportunities as soon as I complete my undergraduate,” Adams said.

Adams understands that he will be competing with individuals at a very high level, some with one to three more years of experience in the college setting than him, but he is willing to accept the challenge regardless. As the style of play from high school football to college football is drastically different, and at a much faster pace, Adams is aware of the amount of training and preparation he must go through to compete at the division one college level.

When you get to the college level, there will be a lot of players who are better than you, very competitive and more knowledgeable. There will be a lot of hardworking people and it will be more difficult to make plays as I did in high school but I’m prepared to work even harder,” Adams said.

As Suncoast Football Coach Jimmy Clark was able to watch Adams develop from his freshman year, Clark admires Adams’ commitment to the sport and what he can bring to the team. He believes that his hard work and dedication will allow him to fit into the college team very well.

“Adams is a phenomenal leader and athlete as he always takes the game seriously and gives 100 percent every time. He is a great football player, but an even better person, which will make him very successful on the Army team,” Clark said.

As Adams had many factors to consider in his commitment decision to West Point, it was very important to be a well rounded, top tier student athlete. The commitment process is a tasking journey for any athlete as they embark on planning their future to find the balance between sports and academics.