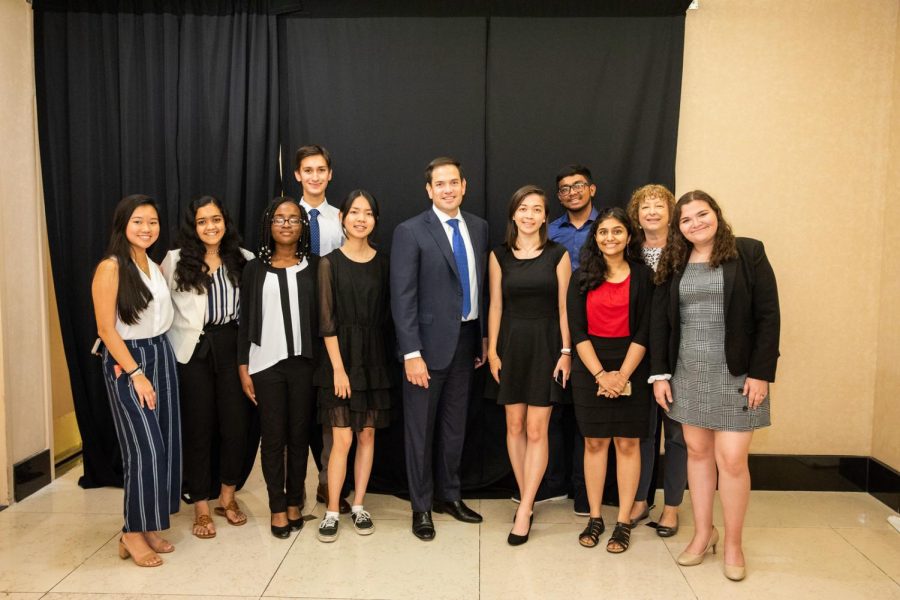 Joined by their former teacher, Roxann Weber, nine students got the chance to hear and meet Florida Senator Marco Rubio at the Forum Club of the Palm Beaches on Wednesday, Aug. 21, 2019.

The juniors, who were invited by Weber, all earned fives on their AP U.S. Government & Politics exam, which they took in May of 2019 during their sophomore year.

Weber, who is invited every year to attend similar events, explained how she chooses students. “I do a lottery. If [students are] interested in going, I put their names in a hat, and draw names […] Or I’ll channel [invitations] to other teachers depending on who the guest speaker is most appropriate for,” Weber said. She hoped students who attended got a real-world experience of how the government works and impacts us.

The juniors’ tables were sponsored by members of the Forum Club, who wished to spur students’ interests in politics and the government through this event.

An attendee of Sen. Rubio’s speech, junior Mahirah Alam, expressed how grateful she was to attend this event. “It was truly amazing that [the sponsors] gave students an opportunity to meet politicians face-to-face,” Alam said.

After being treated to a lunch featuring a wide selection of foods, the students, along with Weber, went backstage, and got the chance to meet Sen. Rubio in person. They shook hands, had a small conversation and took pictures with him.

Once they returned to their seats, Sen. Rubio gave his speech, which touched on multiple topics ranging from the economy, foreign policy and social media. He also made sure to include current issues like alleged sexual predator Jeffrey Epstein’s suicide in jail and the ongoing protests in Hong Kong. Following his speech, Sen. Rubio answered questions from both students and audience members.

On behalf of Suncoast, junior Lauren Brensel asked the senator about gun control, and what the Senate would do in regards to this issue. Sen. Rubio explained how he would like to enact Red Flag laws in more states. These laws would allow the government to seize weapons from anyone that is considered a threat to themselves or others.

“The most memorable part [of this trip] was Senator Rubio’s response to our question about safety against shootings. It was interesting hearing his response on how the Senate is working on a solution that will help decrease the number of shootings across the U.S.,” junior Sadat Uddin, another attendee, said. He highly encouraged any students invited in the future to go as “this is a once-in-a-lifetime event that can have a huge impact on you.”

About 700 people were present at the event. The audience included members of several political organizations, from both sides of the political spectrum, along with former politicians.

Alam conveyed how she thinks “it’s important to provide students with these types of opportunities because it gives them an outlook on the real world, and an idea of some careers they might be interested in.”

Sen. Rubio’s speech at the Forum Club of the Palm Beaches was the organization’s first major event of the 2019-2020 season. The club has hosted similar events involving authors, politicians and Supreme Court Justices.