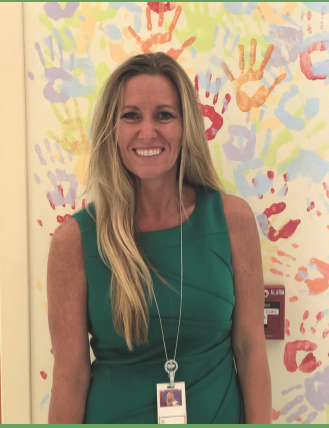 An inside scoop on the new Suncoast principal.

Α job position was open as the new principal of Suncoast High School and a lot of people were in pursuit, including Kathryn Koerner. After the first round of interviews it was announced that they had picked two finalists, one of which was Koerner. Despite being nervous, Koerner was hopeful that she would get the job. During her final interview with Superintendent Dr. Donald Fennoy, Koerner was told that they wanted her for the position. 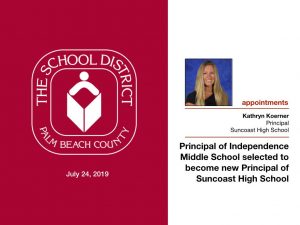 Taking on the role of a High School principal is no easy task. It requires patience, motivation and you have to be able to make tough decisions even if students may not like you for it. Despite all this, Koerner stepped up to the plate. She was previously a principal at Independence Middle School. After the former principal at Suncoast, Karen Whetsell, was promoted to a higher position, Koerner was asked to step in not knowing what was in store.

Being new and having a lot to learn, brings with it a little bit of fear.”

Formerly being a principal of a middle school and elementary school before that, a lot was different than what Koerner had previously known. For instance, Suncoast is a busy school. The school offers many student run clubs that range from school focused to clubs just for entertainment. A variety of courses are also offered at the school meaning no student has the same schedule. Staying on top of thousands of different schedules and one hundred clubs is one of the many tasks Koerner has to do on a daily basis. Even if the task is a difficult one, students believe she is handling the change very well.

“You can tell she’s trying to make her transition to principal as easy and smooth as she can and we appreciate that,” Daniela Orozco, a Suncoast junior said.

After getting through the first week as the new principal, Koerner said that without a single question, the students are the best part of working at the high school. “They have been so welcoming. The staff is a close second but the students have been amazing.”

Koerner wants her students to know that she is always here for them to help them grow and stretch beyond their limits. Koerner encourages students to learn to balance their academics, extracurriculars and their personal lives. Even though she urges students to keep pushing to work harder, she wants them to also find their personal outlets to give themselves downtime. “Sometimes it’s only a few minutes like playing a song or walking away from something and getting involved with a family member or friend,” Koerner said. She is going into the future with many projects in the works and is looking forward to her time at Suncoast.