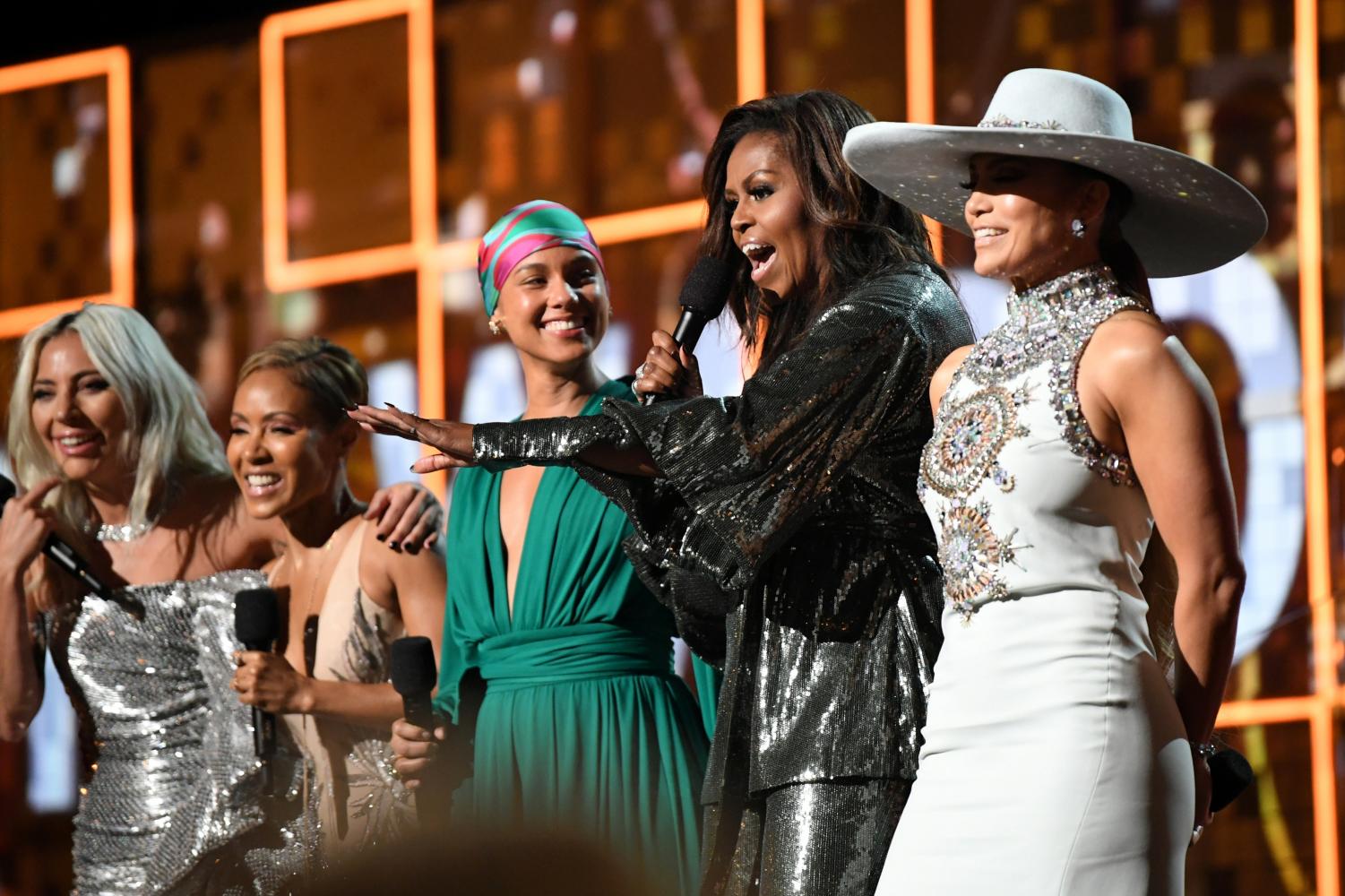 The biggest award show in music made points this year.

The sixty-first annual GRAMMY award show took place on Feb. 10, with the biggest singers, rappers and producers coming together from all around the world to celebrate the power of music. Fifteen-time Grammy winner Alicia Keys hosted the award ceremony, even putting on her own performance with a  medley of popular songs belonging to Grammy nominees. The GRAMMYS are known for creating iconic moments in entertainment, and this year’s show did not fail in making headlines.

Keys commenced the show with the help of four other women: actress-singer Lady Gaga, actress Jada Pinkett Smith, actress-singer Jennifer Lopez, and U.S. former First Lady Michelle Obama. The five ladies shared a dialogue on the impact of music and how it brings people together. “Whether we like country or rap or rock, music helps us share ourselves, our dignity and sorrows, our hopes and joys. It allows us to hear one another, to invite each other in,” Obama said after a long standing ovation.

DRAKE PREACHES… AND THEN GETS CUT OFF

Canadian rapper Drake won Best Rap Song for “God’s Plan” at this year’s GRAMMYs, and showed up from backstage to accept the award.  The rapper gave a moving speech about the value of awards, and stressed that winning one or losing one did not say anything about one’s career. “If there is people who have regular jobs who are coming out in the rain, in the snow, spending their hard-earned money to buy tickets to come to your shows, you don’t need this right here. I promise you, you already won.” After a pause, Drake planned to say more, but the microphone cut off and the award show went to commercial.

American actress and singer, Janelle Monáe, performed “Make Me Feel,” a track off of her hit album, “Dirty Computer,” which was also nominated for Best Album of the Year. Monáe gave an eclectic show, presenting her signature, futuristic-soul musical style and image, and fostering a stage presence similar to her late mentor and icon, Prince. Monáe sashayed and moonwalked along the stage with her well-dressed backup dancers, singing snippets to her other track, “Django Jane,” and iconically ending her performance with a mic drop. “Janelle is one of the most original artists in the industry today,” freshman Brandee Jones said. “The fact that she already performed that song when the album came out and people are still having genuinely positive reactions is so great.”

CELEBRATING THE CAREER OF DIANA ROSS

American actress-singer Diana Ross was honored at the award show in celebration of her seventy-fifth birthday. Her grandson Raif-Henok Emmanuel Kendrick formally introduced the icon to the stage with a light-hearted, youthful dialogue. Ross showed out in a red gown, performing “Best Years of My Life” and “Reach Out and Touch (Somebody’s Hand).” Ross finished off her tribute with a warm dialogue on the power of individuality and music, and wished herself a  happy birthday.