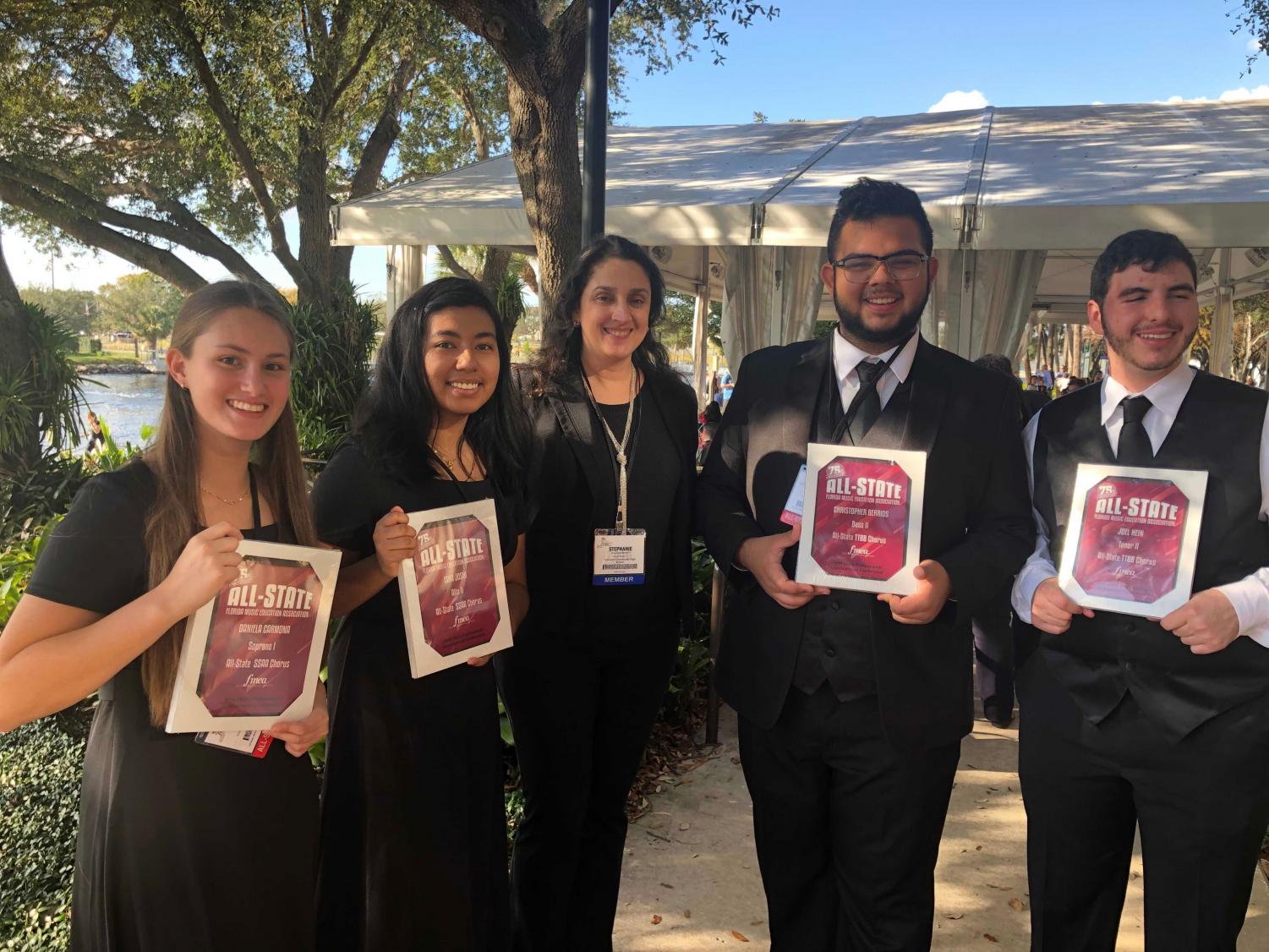 Six students rising to the top in All State.

108 students in chorus, all with great talent, but six students rose to the top. Daniela Carmona, James Seton, Max Fonrose, Chris Berrios, Joel Hein, and Isha Joshi were those six students that had the great opportunity to go to All State this year. These kids are not only in All State, but are in more clubs and classes, like Voices. On top of that, they have their regular chorus period. Every single student that made it into All State had to learn how to balance between their school work and their extracurricular activities. Although chorus and All State is an extracurricular, it does not mean that they do not have to put in hard work and effort, it is actually quite the opposite for these students.

Originally, 14 students auditioned to be in All State. All State is a competition in which kids have to know how read music at a certain level and have to know how to control their voices very well. There are two rounds that the students have to go through in order to make it into All State. Vocalists advance to different stages in All State. There is the group called Mixed, which is considered the higher level course, and then, other soloist have the chance to make it into the Singled Sex Soloist groups. Even though the mixed group is considered higher leveled, it does not mean it is much easier to get into the Women and Men vocal groups.

According to Carmona, “The first audition round is a musicians test and I had to study for that and there is also a sight reading part.” Sight reading is when the competitors receive a certain amount of measures and have to sing the musical parts correctly. Carmona states that she had to study for the musicianship test. Carmona also mentions that she had to study her music three hours daily and had to dedicate a lot of time in order to perfect her singing. “ It is best to be prepared when you going to All State because the first thing judges tend to notice is how prepared you are,” said Carmona.

Although some might believe singing is a talent that comes naturally, which is true, but not everything comes from effortless talent. Musicians who utilize their voices as their instruments, do not accomplish things with ease. They also have to study for tests that they have to pass in order to advance into the next round in the competition. Not only do the students who want to qualify for All State have to study for sight reading and the musicianship test, but they also have to take time out of their day to sing and work with their vocal strategies. Not every student makes time to fit singing into their schedule, but certain kids, like the ones that qualified for All State, practice as much as they can. That is what makes these students stand out. Even though they do have a natural ability to sing, they still make sure to improve as much as they can on their abilities. They are devoted to singing and always attempt to do their best.

After finishing the two rounds in All State, they are rewarded with the chance to travel to Tampa , and perform a big concert where all the contestants that qualified for All States are able to bring their voices together and perform. The show came together in a matter of two days. With this opportunity also comes hard work. The first day of rehearsal they had nine hour long practices. The second day they had a six hour rehearsal and their performance was on the third day.“There was a lady who gave me a good visionary concept in order to not be so controlling over my voice and I had been struggling to accomplish that,” said Carmona. The All State trip did not only give these six students another memorable experience in their high school years, but also helped them improve their skills and allowed them to gain more knowledge.

All State Chorus requires people to commit to their music and take it seriously. With having to practice for hours on music pieces and missing school days in order to perform pieces, there comes a lot of dedication. It is admirable to know that there are still kids with such a commitment for their music. These students are rising to the top.