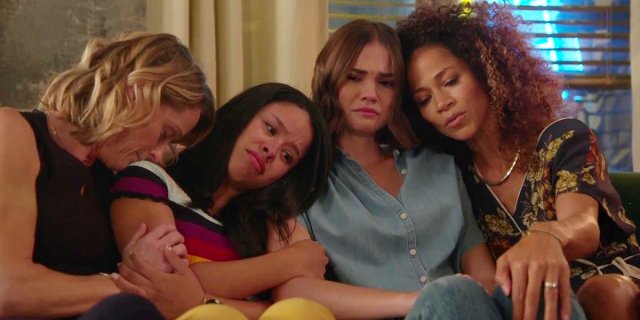 IS IT REALLY “GOOD” TROUBLE?

The Fosters spin-off is getting rave reviews for its inclusive nature.

In the 1980s sitcoms were primarily based upon nuclear families with semi-relatable problems, which allowed their viewers to mindlessly watch hours of the show without much thought on real issues. As television shows have continued to evolve, they have also begun to incorporate current problems impacting society, eliciting their viewers to examine the world around them. Similarly, the new television show “Good Trouble” follows in the footsteps of “The Fosters” in raising awareness of important issues. With only two episodes out, critics are already raving over the inclusion of diverse characters with various backgrounds.

“Good Trouble” is a spin-off to the popular series “The Fosters”, which follows the lives of Callie and Mariana Adams-Foster as they navigate their lives post-college in Los Angeles. The show includes everything that is needed to have a successful show, such as drama, comedy and suspense to captivate their audience.

Within its first two episodes, “Good Trouble” has already hit on subjects such as police brutality, biphobia, sexism in the workplace, fears of coming out and fat-shaming. The aim of the show has been to continue the series their audience loved and continue to raise awareness. “Good Trouble” has succeeded in the perfect balance of entertainment and educational aspects.

“Similar to The Fosters, ‘Good Trouble’ draws attention to important social and political issues such as the struggle for women in male dominated industries and gun violence. The message it carries is definitely on par with its entertainment quality,” Suncoast senior Aanchal Harpalani said.

“I think ‘Good Trouble’ does a good job of representing all types of people. It’s uncommon to see a bisexual male on a popular TV show and I think they’re doing a good job at raising awareness of biphobia. The shows inclusion of different races and sexualties is allowing it to relate to more people, which is a good thing,” Suncoast senior Megan Creamer said.

“Good Trouble” is a great show to watch that effectively demonstrates the benefits of the diversity. Students are also able to relate to show since it follows the lives of young adults who are all involved politically and are transitioning into college and the real world.