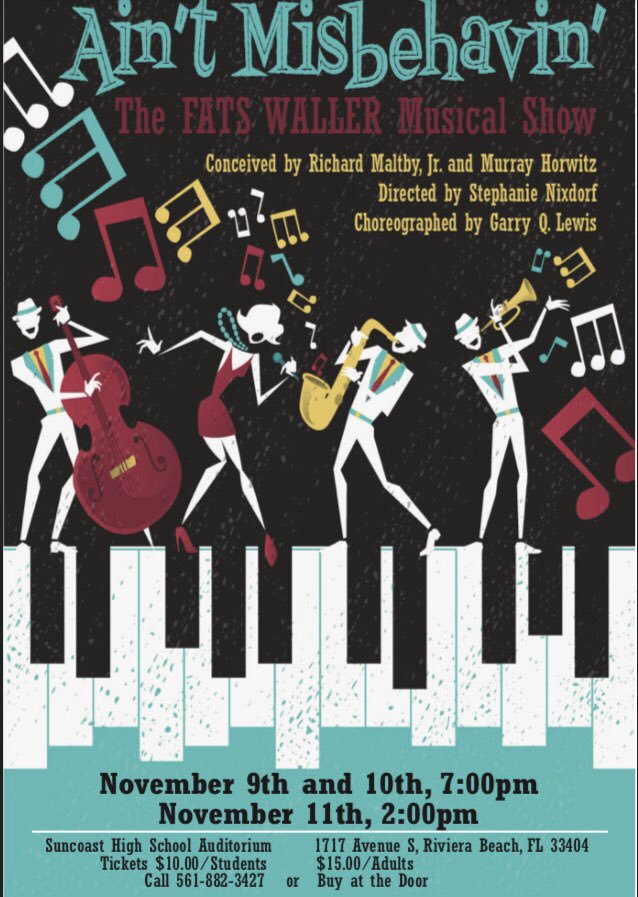 A celebration of the Harlem Renaissance and student talent.

The curtain parts, revealing a lone portrait on the backdrop. Classy ladies and men sit picture-still on velvet benches and plush chairs, glasses of champagne and mugs of coffee half-drawn to their lips. A jazz band starts playing somewhere, saxophones, cellos and guitars setting the mood. Then a piano, cloaked by men in black jackets and girls in shiny red dresses, floats across the stage, a man in a bowler cap playing a lively tune on its keys. The man at the piano looks up, speaks, and the show has begun.

That was the scene set by Suncoast’s production of “Ain’t Misbehavin’,” which ran from Nov. 9 to 11. The show was met with a small, but happy, audience during its run, and featured a cast of 23 students, along with a student tech crew and orchestra. Compared to other popular Suncoast productions, like “Fiddler on the Roof” and “The Drowsy Chaperone,” the cast was small in size, but that did not stop “Ain’t Misbehavin’” from being full of heart.
“The fall show is a lot smaller [than the spring show], so it feels much more tight knit…like a little family,”senior Joel Hein, an actor in the production said.

Another senior, Brenda Robinson, who starred as a singer in the show, found herself comfortable with her castmates, even the new faces. “I met a lot of new people with this show, people who did not do theatre in the past, and I made more friends,” Robinson stated about the subject.

“Ain’t Misbehavin’,” despite having a majority student cast and crew, also had adult dance coaches, carpenters and volunteers assisting the students. The orchestra for the show, referred to as the pit due to their performance area being under the stage, had professional musicians and student band members playing side-by-side for the big performance.

Junior River Garcia, a clarinetist who has been part of the pit since sophomore year, said that, rather than being condescending or rude to him and his fellow band members, the adult musicians were kind and helpful. “Even though, me being just from band, having all these professionals [around us], I felt like I could learn a lot from them. They were good people, and they taught me a lot.”

“Ain’t Misbehavin’,” originally compiled in the 1970s, is a revue of the works of Fats Waller, an influential African-American musician from the Harlem Renaissance. The show was a celebration of African-American culture and heritage and the unique musical variety showcased in the musical touched both students and audiences.

“My grandmother, who came to see [the show], knew many of the songs and was singing along in the audience,” Robinson fondly recalled, also stating that the musical introduced her to many songs and styles she would have not been interested in otherwise.

“The music is fun, playing it is fun,” Garcia stated, “being in the overall environment is really fun.”

For most of the cast, it was difficult balancing school and the musical in the months leading up to the performance. Many of the students involved in the production, along with their programs and homework, had after school jobs or various family obligations.

Hein admitted that “time management is an issue” when performing in the play, but he continued because theatre “is something I’m really passionate about.”

Overall, “Ain’t Misbehavin’” was a critical success for the Suncoast Theatre Department, and now they are looking ahead to their spring musical, which is set to be “Ragtime.”

“Ragtime” will have a much larger cast than “Ain’t Misbehavin’,” and students new to theatre are encouraged to come to the auditions, which will be held in January, or join the crew.

“If you stick with it, and get your time management in, it’ll be one of the funnest things you’ll do,” Garcia said to those looking to audition.

Robinson also advised freshmen and sophomores to try out the theatre program, stating, “When you’re younger, you meet people in your grade level who will continue doing theatre. You’ll have those friends for the rest of your highschool life.”