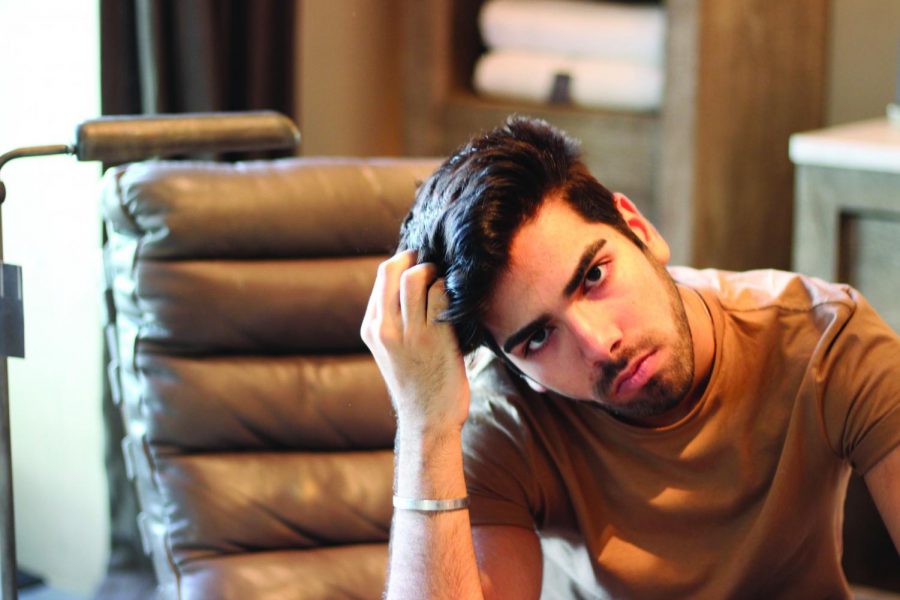 The journey to acceptance is often a bumpy road.

It was a night filled with dancing, laughter, friends, and fun. After months of non-stop homework, test, and assignments being able to just be stress free was exactly what he needed. The want to commemorate the event was too hard to pass up; it was his first official high school dance with a date and it was night he did not want to forget. His date leaned over and placed a kiss on his cheek, “Click.” The photo represented exactly how he felt, happy.

Jose De Alvare went to bed that night with his head above the clouds, but reality soon came crashing in at 2 a.m the next day. With a simple Snapchat post, what had begun as one of his best days ever, quickly turned into a nightmare forever scarred into his memory, no matter how hard he wanted to forget.

“I guess my brother follows my Snapchat and he decided to show the pictures to my dad. So, it was right after homecoming. I had gotten home and I was sleeping, then my dad woke me up in the middle of the night. He asked “What is this?” and he asked me to explain myself, ” De Alvare said.

Before that night, De Alvare never told his family that he was gay; it had always been something he avoided due to his parents’ old fashioned views of how people were supposed to be. It was never something he planned to tell them, so he was always careful with what he put on social media and about what he said to them. Scared of the repercussions, his first instinct was to deny and lie about it all.

“I said, “um it was just a dare, I was just kidding!” I didn’t want to come out because I knew my parents were not approving of it, so I continued to say “It was a dare, it was a joke,” but my dad was not buying it at all. He kept saying “You’re lying, you’re lying.” Eventually I knew I had to do it because he was not believing me. So I said, “Okay I’m gay,” De Alvare recounted.

Admitting the truth to his parents was one of the hardest things De Alvare ever had to do. With his dad being older and from Romania, he believed only in traditional men-women relationships.

After De Alvare came out to his parents they did everything in their power to conform him into the image of what they thought he should be. He was threatened with conversion camp, kept from going out, and forced to talk to a priest.

“When they first found out, they didn’t let me go anywhere or talk to anyone, and they even went to school a bunch of times and threatened to pull me out. They said,“he wasn’t like this before he went to school here. He wasn’t gay. This school changed him. Then they threatened to pull me out a bunch of times. My parents also made me go to confession where I would talk to priest, but I’d tell them I don’t know what I did
wrong and the priest would say neither do I. Not even the priest would think being gay was wrong, but my parents would go to church and constantly try and get me to meet with people. Sometimes they would threaten to send me to conversion camp,” De Alvare said.

Although De Alvare’s parents are not accepting of his sexuality he does not blame them for it. De Alvare associates their closed-mindedness with the way they were raised.

“My dad is really old, he was born in the 1940’s, although my mom is not that old she was raised in a communist country, so I feel like it was how they were raised. I don’t think it is because they are bad people or anything, I just think they don’t understand that it’s normal,” De Alvare said.

Despite De Alvare not blaming them for their views, it did not help him deal with the various confusing and conflicting emotions associated with coming out.

“I never was the type to hate myself for being gay until I started to grow up, and realized my parents disapproved of gay people and didn’t accept them. Up until then, I never thought that being gay was wrong. I thought it was completely normal,” De Alvare stated.

As time passed very few things changed in the De Alvare home. De Alvare’s parents began to ignore his sexuality altogether. The only times it was brought up was when it was used as an insult or to get under his skin.

“A couple of weeks ago he told me if I got married to a guy he wouldn’t go to my wedding, or, since I have a lot of girl-friends, when he see a picture of us he’ll ask if we’re dating,” De Alvare said.

Overtime De Alvare slowly became desensitized to the insults and would brush it off.

“It’s complicated because when he [his dad] first made the comments, it would upset me, and obviously I cried a lot. There was a period in my life when I was really depressed. It was everything, the stress of school and everything. The comments he made really did upset me, because obviously, I don’t want my own family not to be at my wedding because of something so simple that doesn’t really matter in the long term. It’s grown to the point where he makes those comments and I sort of brush it off cause my dad and I never been really close. I’ve grown immune to it because I heard the comments so many times,” De Alvare emotionally stated.

Although coming out to his parents was a traumatic experience, it was not the same with his friends. De Alvare’s friends were more open and accepting of his sexuality and did not judge him.

“In school it was kind of different. I came out freshmen year but everyone already assumed I was gay. I didn’t come out to them at first because I thought they would have the same perspective as my parents, but I came to realize everyone here is really supportive, accepting, and understanding. I knew I could come out to these people because they’re my friends,” De Alvare said.

After realizing nothing could be done to change him, De Alvare’s parents started to come around to the idea that their son was gay.

“I broke up with the first person I had been dating and my mom asked me how I was doing, and if I was okay. I was surprised because I didn’t think she would care enough to ask. After about two years they’ve stopped worrying about it and understood,” De Alvare said.

Coming out has been one of the most emotionally traumatic experiences for De Alvare, but to him it was best thing that needed to happen. If it were up to De Alvare, he would do it all over again.

“I’ve learned that even though being yourself is never easy, in the end, it’s worth it because it’s not good to suppress who you really are,” De Alvare said.