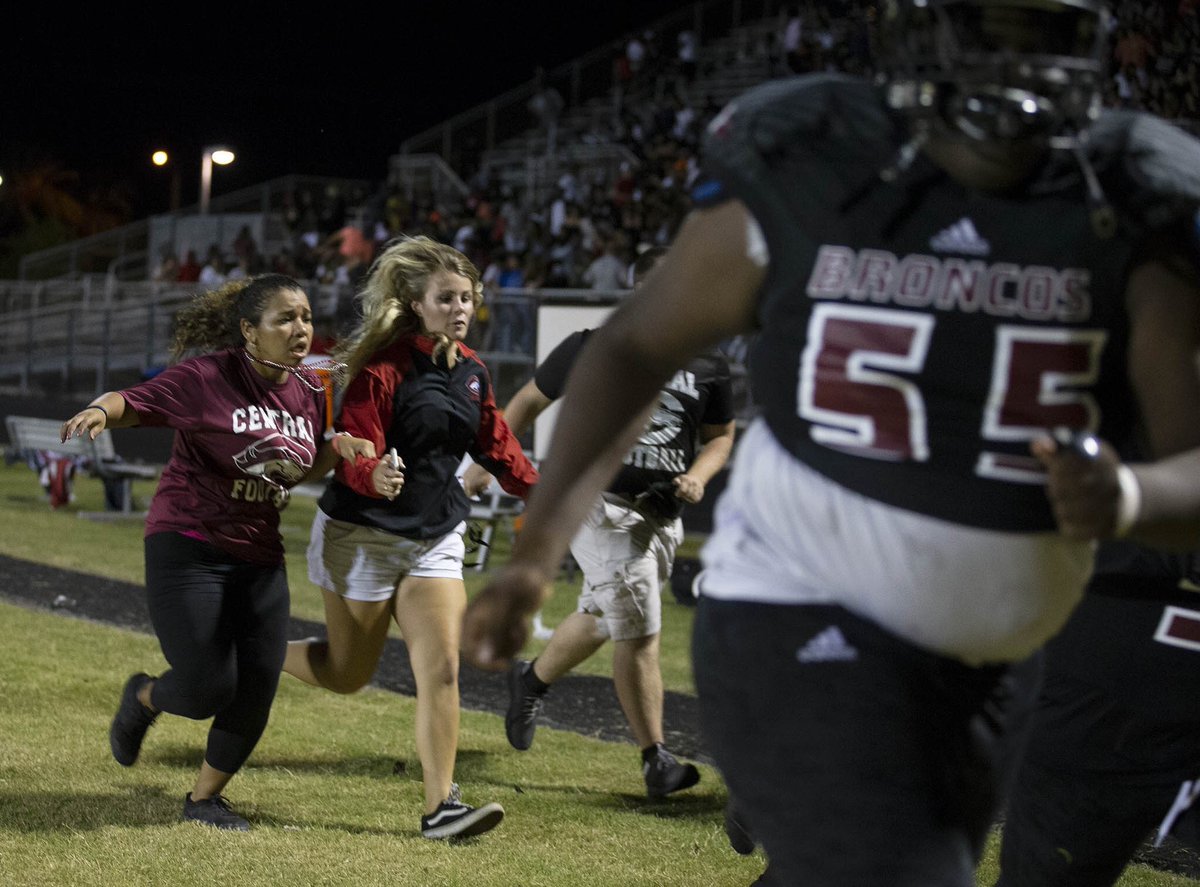 A SHOT FOR CHANGE

School shootings must be prevented, despite the cost.

It was an average Friday afternoon on August 17. High school students across the Palm Beach County school district were busy after school as they began to get ready to go the first football game of the 2018 fall season.

The game would be held in Wellington at Palm Beach Central High School and began at 7 pm. The night was going well for students, and the air buzzed with excitement as both Dwyer and PBC players battled it out on the field. This peace and joy did not last long however. Around 9 pm, eight minutes before the game was about to end, shots rang out over the crowd. Witnesses say that two men had gotten into a fight while in the school parking lot. Soon after, a gun was pulled, and the first shot was fired.

After hearing four gunshots, attendees of the game ran for their lives, and in a crazed mixture of both players and fans, the stadium’s inhabitants poured out into the lot, hurriedly scrambling to get to their cars, and find safety. The field left in a cluttered mess. Once police arrived on scene, and the chaos settled, it was confirmed that two victims, both male, had been shot, though neither of the two injuries were fatal. It was reported that one of the victims was purposely targeted, and both were taken to the hospital soon after. One of the victims had been admitted in stable condition, while the other admitted in critical condition. One of the victims was a father of one of the football players, however neither the shooters nor the victims were attendees of either high school. Police and school staff have deemed the shooting not to be a “school shooting,”, although it took place on school grounds. It was still a major threat however, to both the physical and mental stability of the students, and officials continue to offer counseling and solutions to prevent shootings such as these from reoccurring.

It is absolutely unacceptable that in this day and age we as Americans can no longer walk the streets of our cities without feeling a sense of danger. Our own schools, which should be sanctuaries for our children and ensured to keep them safe, seem to be less and less secure as the count of shootings increases. Today, the students of palm Beach County are suffering the consequences of a few heartless people, with or without motive to shoot others.

Because of the continuance of these acts of violence, Suncoast principal Karen Whetsell, along with other principles and the district of Palm Beach County, has implemented new rules for those wishing to attend football games in an effort to continue the prevention of armed violence within schools.

Such rules include a change in the start of any further football games. The games will now begin at 6 pm instead of the usual 7 pm. This helps extend the amount of daylight that officials and supervisors have in order to keep a better watch of those attending the game. With the games starting earlier, families will be able to get home at more reasonable times. If any of the game’s attendees were to be caught in another situation much like the terror of August 17, the earlier time of the games will help to ensure the presence of broad daylight, heightening safety measures.

Also, no one attending the games will be allowed to carry in backpacks, unless they are clear. As described by CNN, the rule of clear backpacks was also implemented in February after the school shooting in Parkland High School. Many of the students returning to Parkland disagree with these measures, saying that they find them an invasion of their privacy and irrelevant when it comes to the prevention of more shootings. Many have begun to protest against these so-called intrusive rules.

Suncoast Senior Latasha Smith was one of the many Suncoast students who attended the game on August 17. Smith described just how scary that night was and the importance of keeping herself and her family safe.

“I honestly don’t agree with the time, I think the time is fine. It was I guess at that moment you just bought your ticket and walked in, so there was like no one really checking you for anything. So I think they just needed to be a lot stricter.” said Smith. Other rules, along with no bags and the timing of the games, require students to remove hoodies when entering the stadium as well, and must comply to the new rules. These changes comply very similarly to the rules used in NFL and NCAA games. Officials believe that these changes will help to both prevent future shootings, as well as make these unfortunate events easier to control. She, along with most students, simply want their schools to be kept safe, and through these rules, everyone will be able to enjoy extracurricular activities knowing that they are being protected, as a community and through the strength of the administration’s new policies.