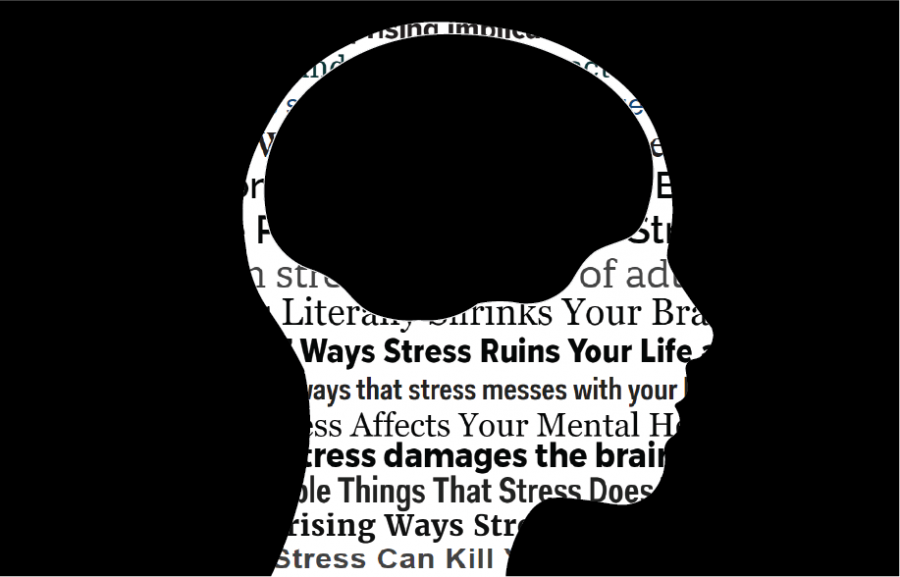 In a school that revolves around highly competitive grades, stacked resumes, and sleepless nights, students often succumb to the dangers of stress.

Any psychology student can easily recite the oft-mentioned phrase “It’s only stress if you appraise it as stress” on command. For many students, however, the ability to appraise stress seems to fall outside of their hands and instead serves to hinder their ability to work under the pressure.

A 2014 study by the American Psychological Association (APA) found that high school students report having higher stress levels than adults. On a 10-point scale, teenagers rated their stress as a 5.8 while the average for adults was only a 5.1 on. This is quite alarming considering the many concerns adults face that high schoolers most likely do not, such as finances, children, work, and many other stress-inducing factors.

Student stress represents a systemic problem in the way schools function. In order to appeal to universities, scholarships, and other entities that judge students based on their past accomplishments, they attempt to stand out from their peers. As students strive for perfection, grades and achievement become more important than self-care. Without any resources to consult, students build up an unhealthy amount of stress but lack an outlet to release it, damaging their physical and mental health in the process.

Sleepless Nights
According to a University of Phoenix study, high school teachers assign, on average, half an hour homework assignments per night. For students with a typical seven class schedule, this translates to 3.5 hours each day. This number may vary in response to Suncoast’s block schedule and the number of Advanced Placement (AP), International Baccalaureate (IB), and dual enrollment courses a student takes. In addition to their academic requirements, students may become employed or have familial responsibilities, both of which further limit their free time outside of school.

The American Academy of Pediatrics recommends schools start classes no earlier than 8 a.m. to provide students more time to sleep. Suncoast currently begins at 7:30, and, as a magnet school, students may spend 45 minutes or more commuting both to and from school.

When accounting for after school activities and transportation, students may be at school for over 12 hours a day. Students then must choose between school work, outside obligations, social experiences, and sleep.

What results is a vicious cycle in which failing to get enough sleep can be viewed as an achievement rather than a real problem. The National Sleep Foundation reports that teenagers need between eight and 10 hours of sleep on average to function at their best. Only 15 percent of high schoolers, however, receive 8.5 hours of sleep, which is toward the low end of the recommendation. To compensate, students sleep in on the weekends as way to make up for lost sleep throughout the week. This only exacerbates the problem as the irregularities in sleep patterns disrupt the body’s biological clock. While sleep can help alleviate the effects of stress, a lack of sleep only serves to increase stress, which, as a result, decreases the quality of sleep received over time.

Refuse to be Ordinary
As many students know, Suncoast is not “normal” in many ways. The school is ranked by many different organizations, including the U.S. News and World Report and Niche, as the best high school in Palm Beach County and one of the best in both Florida and the United States. In addition, The Washington Post named Suncoast the 15 most difficult high school in the nation. While these rankings are proudly displayed on Edline, PowerPoints, agendas, and many other school-related items, they also represent the overly-competitive, and unhealthy, school environment.

To Suncoast students, there is nothing worse than being average. One always has to be doing something to stand out, whether it be through academics, athletics, community and school involvement, or any combination of these. This thinking manifests itself in the school motto, “Refuse to be Ordinary,” and last year’s yearbook theme, “Atypical,” which imply that there is an inherent problem with being what is arbitrarily defined as “ordinary.” Although these are meant to encourage students to reach their fullest potential and be true to themselves, they serve to reinforce the dangerous message that being average or normal is necessarily a bad thing. Mark Manson, author of Subtle Art, claims that people fear accepting mediocrity because they equate acceptance with “never achiev[ing] anything, never improv[ing].” Students may set their eyes on perfection, but when this does not materialize, they feel defeated (and rightfully so). Any blemish on one’s resume or academic record is taken as an immediate failure.

This provides the groundwork for creating a fixed mindset. According to psychologist Carol Dweck, a fixed mindset is detrimental to students’ success because they then believe their skills and abilities have plateaued. In contrast, people with growth mindsets know that they can improve through hard work and dedication, increasing the odds of success. The guidance department has pushed students to evaluate their mindset and aim for one of growth over fixation. As Suncoast tends to favor students who learn quickly and are “naturally smart,” those in the middle may feel stuck, or fixed, at their current level.

The contemporary need to stand out is evident throughout the Palm Beach County School District. The choice program system allows students to apply to schools throughout the county to enroll in special course tracks based on their academic interests, career prospects and talents. While specialized education has grown greatly in recent years, the more shocking fact is the widespread availability of these programs to elementary and middle schoolers. Students, from the very beginning of their education, are encouraged to find ways to “get ahead” of their peers. Elementary students can explore Science, Technology, Mathematics, and Engineering (STEM), Veterinary Technology, and Health and Wellness programs with in-depth curricula. Furthermore, middle school students can gain laboratory and field experience through Pre-Biotechnology, Pre-Medical Sciences, and Pre-Information Technology programs taught by industry professionals. Universities often refer to their students on track to meet the requirements for medical school as pre-med, so perhaps a better name for these middle school programs would be Pre-Pre-Pre Medical Science/Biotechnology/Information Technology.

While students may learn very useful skills and material for their future studies, these choice programs merely represent the enhanced standards students must meet to qualify as “extraordinary.” Consequently, those who are not aware of these opportunities can fall behind in the race toward perfection. Although competition is necessary to encourage students to perform their best, an overabundance of competition can have two extreme results: an unsustainable effort to succeed or a lack of motivation to achieve. Both have equally negative effects on students and increase the stress students face.

Work Smarter, Not Harder
Of course, students cannot be entirely dismissed of their role in handling and preventing stress. Students are responsible for knowing their limits and recognizing their role in creating additional stressors. Whenever stress management is mentioned, the first tip is almost always to avoid procrastination. This is almost laughable to Suncoast students who seem to always leave assignments until the last possible moment. Despite the pride many take in cramming or finishing something right before it is due, this is not a healthy practice. Time management is an important skill that is useful throughout life.

It is also important to realize that not all stress is harmful. In fact, Richard Sapolsky, a leading researcher in the field of neuroscience, describes the role of stress as an “inverted-U”; while stress in small, short doses aids performance, prolonged exposure to stress impedes it. Understanding the role of stress may allow students to perform better.

Looking Forward
Unfortunately, systemic change on a widespread basis is unlikely to happen. While Suncoast has taken steps to address the issue, there are still improvements that can be made. Combatting stress and its related issues should be a year-long conversation, not just something mentioned once in a beginning of the year PowerPoint presentation. The “Be Real, Not Perfect” campaign is a great example of the initiatives already taken in which students are reminded to embrace their flaws, but this is only one week of motivation. If this were to be continued throughout the year, however, significant change could occur throughout the student body.

Business Insider suggest multiple changes schools can take to promote a better school environment, including student-pairing system, study periods, and yoga. Starting school later could provide students the opportunity to follow a more regular sleep schedule. Most importantly, students must feel they have somewhere to go to relieve stress.