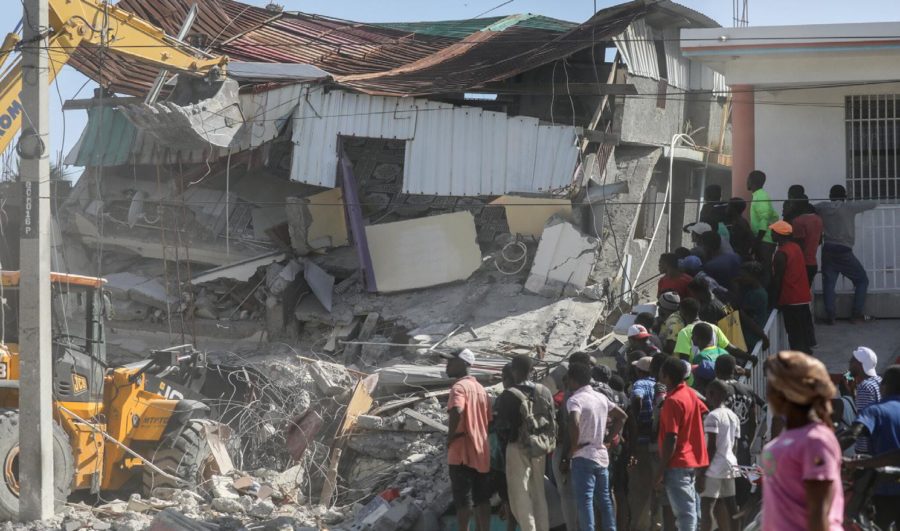 The remains of a hospital after the earthquake.

An earthquake fatally struck the Caribbean country of Haiti on August 14, 8:30 a.m. At least 2,248 people are known to have died in the 7.2-magnitude earthquake according to reliefweb.int. This earthquake that shook the country left more than 650,000 citizens of Haiti in need of emergency humanitarian assistance, over 12,000 people with minor injuries and over 300 people missing.

The fatal earthquake struck in a mountainous area between the Nippes Department and Sud Department at a shallow depth of 6.2 miles, which heavily increased the effect of the damage on the surface. This particular mountainous area that was struck also was where several major hospitals were located. Due to the major hospitals that were damaged, this rendered most medical services useless to those who were wounded during the earthquake. Professional medics and doctors made makeshift tents to attempt to help the wounded, but not all could be helped.
Suncoast senior, Jerry Moncoeur, had family members who were affected by the earthquake. “My family and I are sending supplies directly to my family and other survivors to support them in any way we can.”
Moncouer reported that he struggled to contact his family members in Haiti. “They said the power lines and cell towers were destroyed in their area, so they have to relocate to another district to use their phones.”

Hundreds of Haitians have been tended to medically and families are losing each other.

“There weren’t enough doctors and now she’s dead,” said Lanette Nuele. Her daughter was fatally wounded and later killed during the tragic earthquake. There are many stories of families that have lost loved ones because of this natural disaster. An orthopedic surgeon, Edward Destine, had tended to the injured there. “I’m the only surgeon,” he said. “I would like to operate on 10 people today, but I just don’t have the supplies,” he added, saying he needed intravenous drips and antibiotics (nytimes.com).

According to UNICEF, nearly 70 percent of all schools in the area within the earthquake and surrounding areas were severely damaged or destroyed during the earthquake. This destruction caused many schools to delay the start of the school year by 3 weeks to a month. More than 230,000 children are at risk of dropping out of school if classrooms do not reopen.

Due to the untimely murder of the president of Haiti Jovenel Moïse, killed months prior, relief efforts given by the Haitian government are severely limited.

The tropical storm Grace came following the devastating earthquake, which also limited relief efforts given by neighboring countries who also were struck by the violent tropical storm. Countries such as Mexico, who have a history of welcoming foreigners when America would not, offered open arms to help the citizens of Haiti and immigrants who attempted to leave their country due to the pandemic. Tropical Storm Grace, which struck Mexico Aug 21, 2021 as a category 3 hurricane, hampered the relief efforts of Mexico for the many Haitian families who have sought shelter and refuge in order to live a better life in a different country.

Clubs within Suncoast hosted food drives where students can donate supplies to Haiti. Haiti will recover soon enough from these recent tragedies the country had faced, and all of our prayers are with them.