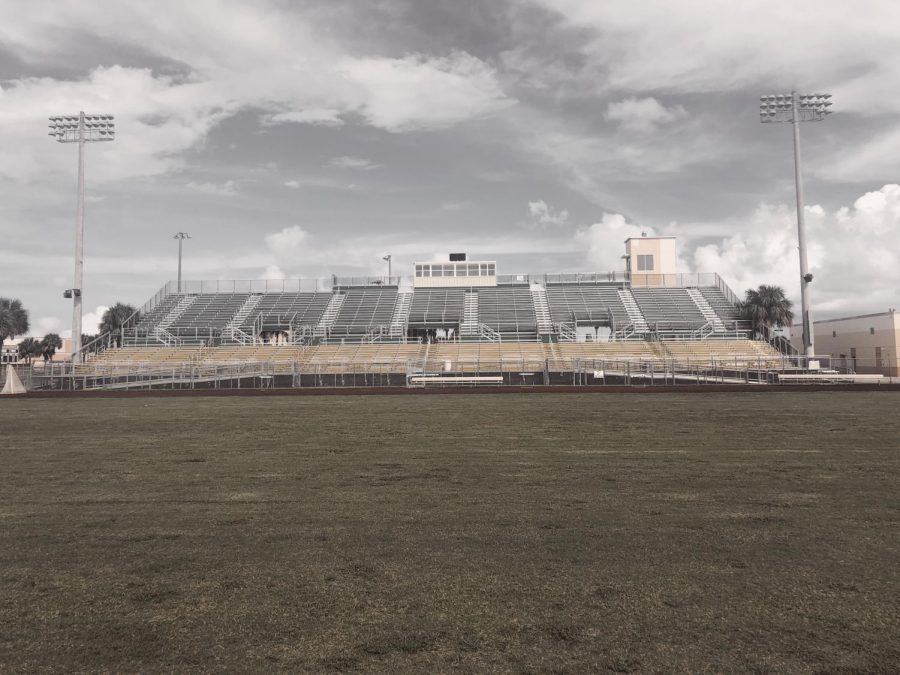 As of March 2020, the football stadiums have been eerily quiet. Since Mar. 13, the last day of school before quarantine life took over, stadiums and schools in Palm Beach County have been sitting empty, waiting for people to populate them again. Any other year, the fall sports season would have started mid-July, but under new circumstances, the stadiums have been completely empty all throughout July and August.

Palm Beach County athletes know the process for starting up fall sports was long and excruciating. PBC has been on the slower side of reopening in Florida since the March shutdown. This has caused stress on all sports, including professional, college and high school teams.

“It (the modified season) is stressful but thankfully we have awesome coaches and I have a great team that works with me and spreads out and services each of the teams. I feel good about it. We have been planning, and working pretty much all summer getting ready for this to start,” said Athletic Director Kelli Erianne.

“This is going to be a tough beginning to our season because we have to do three weeks of conditioning in pods with only a few kids in each pod with one coach. But, our kids are excited to get out there, and they will do great,” said head varsity football coach Jimmy Clark. Despite the setbacks, football is on its way back and stadiums will be filling up with fans soon enough. Die hard fans like Clark are missing a key part of their team right now.

On Sept. 8, phase one began. This allowed coaches to begin communication with players. Phase two began on Sept. 21, which allowed coaches to start outdoor conditioning in pods of no more than nine players and one coach for only one hour a day.

There are countless measures being taken to prevent the spread of COVID-19. These procedures include athletes touching minimal equipment and washing their hands before and after practice. As we move into phases three, four and five the groups will be allowed to grow larger along with the allotted time periods.

“As long as we as a team are working hard to prevent the spread of COVID-19, I think we will be able to keep each other safe,” returning player and junior Luis Otero said. With practices having started on Sept. 21, the anticipation has been building for the football team to start their season.

Additionally, the football games are modified this season. The amount of games have been cut down immensely and players have only been allowed to have two tickets per participant and per coach. Social distancing between parties is being enforced at all times including when seated in the bleachers and masks will be required.

“I’m excited for this season regardless of the conditions. I can’t wait for my opportunity to play on Varsity as the starting quarterback. I’m most excited for home games because even if we don’t have much of a crowd because of COVID the atmosphere will be better for the team,” sophomore Josh Ramos said.

As for the seniors, many would say this is not what they expected their last season playing high school sports to look like. While COVID-19 has presented some obvious obstacles, Suncoast is conquering them with no fear, but with immense caution.

“I never would have guessed my senior year would have looked like this, but we’re working through it and football’s football,” senior Will Wells said.

While sophomores, juniors and seniors have no problem with the dynamics, the class of 2024 is beginning high school blind. As for sports, the freshmen are excited to finally meet some teammates in person.

“I’m not excited for virtual school my freshman year because I don’t feel that I’m learning better in virtual school than regular school. I feel like the modified season is safe and it’s better than playing nothing at all.” freshman Malik Mussadiq said.

As for the other fall sports, each sport’s team has gone to great extents to take precautions to stay safe. Each sport follows the five-phase plan, while differing slightly whether they are usually in the gym, swimming pool or football field. The fall season is finally starting up and Charger athletes are ready for the challenge.