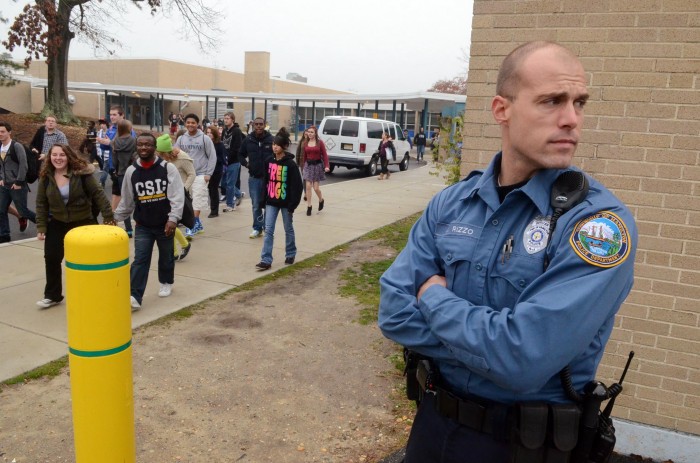 Students say Suncoast should be next.

Students attending Jupiter Christian School, in West Palm Beach, came back from winter break to a new and improved campus: one equipped with a brand new security system designed to protect kids from school shooters and other dangers presenting themselves to Florida campuses.

The system included flashing alarms, emergency push button boxes and wearable pendants programmed to send the police flying to the school when triggered, as well as notifying other teachers on campus. The system even informs the police of the exact classroom which sent out the alert. The technology’s breadth and accuracy is only mirrored by its expense, costing the private school a cool $35,000 to install.

According to Jupiter Christian’s director of facilities and operations Jacob Godino, the cost of the system is not the number people should be worried about, but, rather, how many lives are saved because of the tech.“The reduction of time and the response—if it saves one life, the system is worth it.”

Which raises the question – should Suncoast be the next school to update its security?

For senior Aura Garduno, the answer is yes.

“We [Suncoast], I feel, don’t have a strong security as we could possibly have,” she stated. “Especially on the outside doors. People always prop it open, someone could easily knock and let a student in – it’s not entirely the safest.”

Another senior, Taneria Tysinger, expressed concern about the readiness of the school to evacuate its students in an emergency situation. “[We need] a way to escape the classrooms, especially on the second and third floors… so if an issue as serious as a school shooter does happen, then you know we’re not just sitting ducks in a classroom. If there’s time to escape, then there’s a way to escape.”

“The flashing alarms,” Garduno pointed out. “I feel something like that, in the event of a school shooter, would lead to more panic than calm. But the whole immediately calling the authorities sounds, definitely, like a good thing.”

Tyinger, however, had questions about who would be allowed access to the technology, stating that wearable pendants would not be effective if only available to a portion of the staff. “You never know who’s gonna be in trouble and where they are…if one student was by themselves [in a school shooting situation] they would have no way to contact the police and anybody else, because they’re isolated.”

Sophomore Finn Wilson did not have any questions about Jupiter Christian’s technology, because, as he stated, he did not feel it necessary in the first place.

“I do feel secure at Suncoast,” he said, explaining that “there’s only one main entrance and we do have a police officer on campus full-time.”

Wilson also stated that, while not an advocate for more security, he would not be opposed to any new changes. “To make the Suncoast community safer,” he agreed.

For now, though, most of the measures mentioned remain a distant dream, with no comment from the Palm Beach County School District on whether they would look further into any more new security implementations or follow Jupiter’s Christian’s lead.