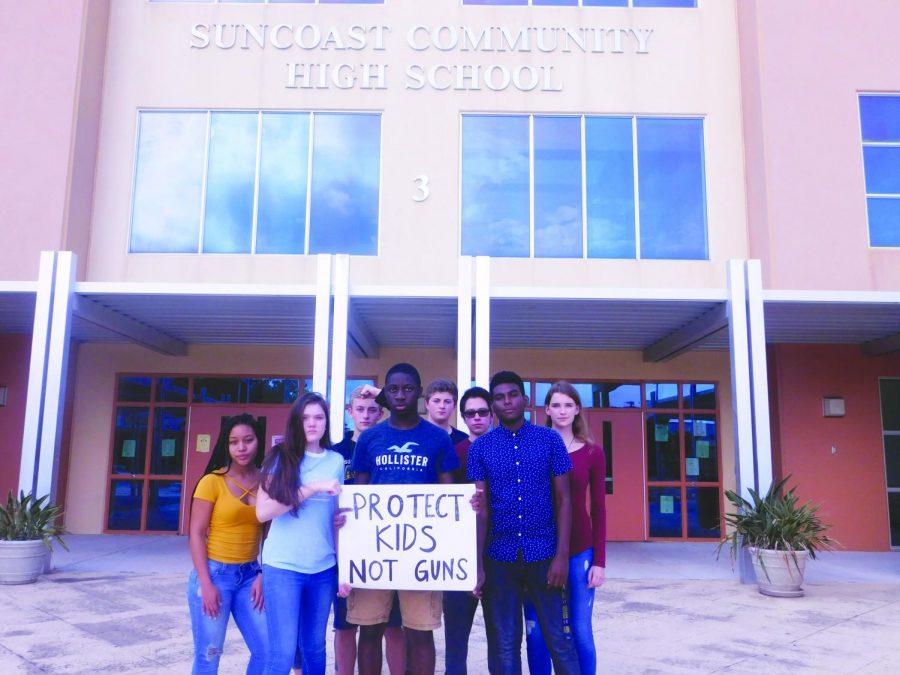 All I want for Christmas is... gun control.

“We need to step out of it and take a look back and realize that there’s something seriously wrong here. And some of our policymakers…need to look in the mirror and take some action, because ideas are great, but without action, ideas stay ideas and children die,” David Hogg, survivor of the Parkland shooting said.

As of Dec. 8 there have been 326 mass shootings in the 341 days of 2018. According to The Washington Post over 1,000 people have died as a result of these shootings. With the continuous rise in the number of mass shootings, young people have began to get more involved in politics. Many students at Suncoast have started political action clubs, organized marches, and voted in order to promote change.

“I think it is so important for our generation to become more politically active, especially during these crucial times of gun violence, as well as many other issues. There will only be change if people speak up,” senior Megan Creamer said.

“Thoughts and prayers for Thousand Oaks”

Earlier this year, Suncoast hosted their own walk-out a month after the Marjory Stoneman Douglas shooting in support for change in gun policy. Students were able to sign up for voting, listen to speeches, and write letters to their representatives. It gave students the opportunity to become actively involved in politics and see that they have a voice to make a difference.

“I think young people underestimate their power in politics just because they can’t vote yet or because they assume they’re not informed enough to weigh in. When students go to marches it’s almost like an alternate world where they forget any excuse they gave themselves to ignore politics and are forced to look at all their peers in the face and understand the value they have in the political spectrum,” senior Mae Baltz said.
While the march was successful and impactful to most students, some students believe more can be done to begin the conversation of changing gun policy. Many believe the march is only the first step of many to make actual change.

“I didn’t think the march at school was helpful as there was still restrictive boundaries of how the march was held. We were all on school grounds basically protesting to each other and not the public so it wasn’t beneficial to spread the word and awareness of gun control,” senior Janet Singh said.

After the march and the shooting at Marjory Stoneman Douglas, the school district began to work on changes to make students safer. Most recently the shooting at the Palm Beach Central High football game caused the Palm Beach School District to implement NFL game regulations and policies within the school. Some policies include continuing to keep classroom doors locked at all times, and keeping the classroom windows covered.

“I like that they are taking actions in order to protect us and feel more safe in our environment, but I feel as though we should focus more on gun laws and gun safety,” senior Rebecca Imru said.

In response to the shootings nationally, multiple students and adults participated in the March for Our Lives this past March in order to promote policy change. The march was organized by the members of the Never Again MSD to demonstrate unity among the nation against a problem that has largely impacted the entire nation.

“Although the March for Our Lives inspired many to register to vote, the overall message of the movement was to activate more gun control. We still need to focus on this aspect in the future,” senior Claire King said.
With the overwhelming number of mass shootings this year, students are beginning to become emotionally affected by them. For some students, it is beginning to feel like everyday news; as though mass shootings are just apart of the world.

“Sadly I have become desensitized over the amount of mass shootings that has happened this year. Now when I hear about another mass shooting on the news or seen thoughts and prayers on instagram, it slowly began to not impact me as much,” senior Ricardo Rankine said.

To many students, the purpose of gun control and policy change is not to take away anyone’s Second Amendment right, rather to protect the lives of the innocent.

“Too often polarization in the government paints gun control as taking away people’s freedom, but it is simply just controlling a commodity,” senior Robin Greenstein said.

Some policies changes some students want to see include stricter background checks, restricting those who are mentally unstable from being able to legally acquire guns, and implementing the ban on bump stocks. Each of these policies have the potential the lessen the amount of mass shootings.

“In today’s political climate, whenever anyone hears gun control they assume we want to take away guns from everyone, but that’s not true. I am all for people wanting to protect themselves; I simply just want stricter gun laws, where the mentally unstable can’t acquire weapons legally and stricter background checks are set into place,” senior Yanique Spencer said.

“Thoughts and prayers for Parkland”